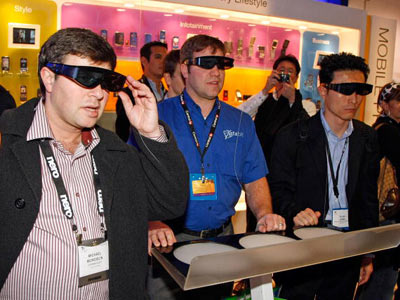 3-D televisions seemed to be everywhere at the 2009 Consumer Electronic Show -- these attendees are looking at a Samsung 3D TV.
Ethan Miller/Getty Images

Why can you look at an object in the real world and see it as a three-dimensional object, but if you see that same object on a television screen it looks flat? What's going on, and how does 3-D technology get around the problem?

It all has to do with the way we focus on objects. We see things because our eyes absorb light reflected off of the items. Our brains interpret the light and create a picture in our minds. When an object is far away, the light traveling to one eye is parallel with the light traveling to the other eye. But as an object gets closer, the lines are no longer parallel -- they converge and our eyes shift to compensate. You can see this effect in action if you try to look at something right in front of your nose -- you'll attain a lovely cross-eyed expression.

The secret to 3-D television and movies is that by showing each eye the same image in two different locations, you can trick you brain into thinking the flat image you're viewing has depth. But this also means that the convergence and focal points don't match up the way they do for real objects. While your eyes may converge upon two images that seem to be one object right in front of you, they're actually focusing on a screen that's further away. This is why you get eye strain if you try to watch too many 3-D movies in one sitting.

How do you show two different images that appear to only be one? It's all in the lenses.