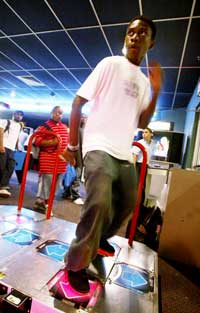 A study that was, ironically, funded by Nintendo's U.K. marketing arm, burst the bubble of many people who were placing all their fitness eggs in the Wii basket. Entitled "Comparison of energy expenditure in adolescents playing new generation computer games," the study revealed that while Wii Sports games resulted in greater energy expenditures compared to inactive video games, the overall differences were negligible [source: Neale]. The weekly calories burned on the Wii were only 2 percent higher than with the stationary Xbox 360 game "Project Gotham Racing." In addition, energy spent during the active video gaming did not meet physical fitness standards established for adolescents.

Ben Kuchera, writer for the gaming Web site ArsTechnica, created his own video game experiment, playing Dance Dance Revolution, EyeToy, Yourself Fitness and Wii video games. Using a combination of the four games for a half-hour a day, along with improved eating habits, Kuchera dropped 20 pounds in two months. Interestingly, Kuchera found that the Wii wasn't as conducive to vigorous exercise because unless you really want a workout, the controller will work with gentle flicks of the wrist [source: Kuchera].

Games aside, how does the Wii match up to actually going outside to a tennis court or hopping into a boxing ring? Can the video games cut it against live sports?

In short, no. According to calorie estimates from the Mayo Clinic, you burn about twice the calories in tennis, boxing and golf when you do it the real world. Bowling, however, almost matches DeLorenzo's calorie count, with around 208 calories burned in an hour of Wii bowling and 219 calories at the bowling alley. Also, considering that people burn around 60 calories per hour resting and 100 calories per hour typing, the 150 calories used with an hour of Wii play, as found with the Liverpool study, isn't much of a boost.

Nevertheless, the Centers for Disease Control and Prevention recommends a "moderate amount of daily physical activity," whether that's brisk walking or jogging. Against this standard, putting your all into Wii Sports boxing or tennis for 20 minutes or so probably fits the bill. Just like any exercise program, you get out what you put in. And since more than half of American adults don't get enough physical activity [source: Centers for Disease Control], the Wii could hold more potential than some studies suggest.

For other ways to get fit and maintain a healthy lifestyle, go to the links below.