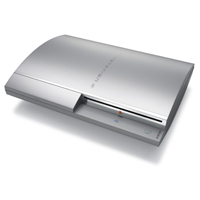 The PlayStation 3 has a processor that acts like a biological cell in an organism.
Image courtesy 2005 Sony Computer Entertainment Inc.

So how do the big three match up against each other? Let's take a look at each system based on specific criteria. We'll start with processors.

The PlayStation 3 uses a Cell processor. Developed by Toshiba and IBM specifically for the game system, the concept behind this processor was to create a chip that acted like a biological cell in an organism. It's distributed computing on a single chip. Cell processors can cooperate with each other, making it possible to create virtual supercomputers by linking multiple cell processors together.

The Xbox 360's processor is a customized Power-PC based CPU from IBM. It has three symmetrical cores that run at 3.2 gigahertz (GHz) each. This processor has a lot of horsepower, but it lacks the Cell architecture of the PlayStation 3 design.

The Nintendo Wii's processor isn't quite as impressive. It's an IBM Broadway 729 megahertz (MHz) processor. While the chip isn't in the same league as its competitors, Nintendo executives say the processor is more than powerful enough to provide a fun gaming experience.

Next let's look at graphics. The PlayStation 3 uses an RSX graphics processing unit (GPU) that runs at 550 MHz. The Xbox 360 has a 500 MHz ATI GPU. The ATI Hollywood 243 MHz card powers the graphics for Nintendo Wii. The PlayStation has the edge on the specs, though some gamers say they feel that the Xbox makes better use of its capabilities than the PlayStation. Meanwhile, Nintendo claims that the company wants to focus more on making games fun and less on beefing up graphics.

Audio is a similar story. The PlayStation 3 and Xbox 360 can provide Dolby surround sound. The Nintendo Wii can produce stereo sound and simulate surround sound, but again its specs fall short of the other two.

All three systems can connect to the Internet. Microsoft's Xbox Live service is arguably the strongest presence in console Internet gaming, but Sony is trying to change that. Nintendo made loyal fans very happy when it announced gamers would be able to purchase and download many classic games to the Wii system. All three companies are also exploring social networking applications through these video game systems.

The PlayStation 3 is also a Blu-ray DVD player, which might give it the edge over the other two consoles. For people who want a Blu-ray player and a game system, the PlayStation 3 is a tempting choice. Before the end of the high-definition disc wars, Microsoft released an external HD-DVD drive that users could connect to its Xbox 360 console, but discontinued production in February 2008 after the HD-DVD format gave up the ghost [source: GamerScore Blog]

For hardcore gamers, the choice usually boils down to either the PlayStation 3 or the Xbox 360. While the specs seem to favor Sony's console, other considerations like game libraries and online play can lure gamers to Microsoft. ­Some gamers like to look at backwards compatibility -- can the new systems play the games designed for older systems? The PS3 can play some games designed for the original PlayStation but not PS2 titles. The Xbox 360 can play most Xbox games but there may be compatibility issues with some games.­

The Nintendo Wii is a different beast entirely. It appeals to casual gamers -- people who aren't necessarily interested in devoting hours of time to hone their skills and become gaming masters. Hardcore gamers can enjoy Wii games too. While the 360 and PS3 satiate gamers' bloodlust, the Wii seems to have a more broad appeal.

Which video game console will reign supreme? Microsoft, Sony and Nintendo all claim that their respective console will sell the most units. But no matter which company comes out on top, it's safe to say that all gamers are winners.

On the next page, we'll take a look at some interesting facts about video game consoles.