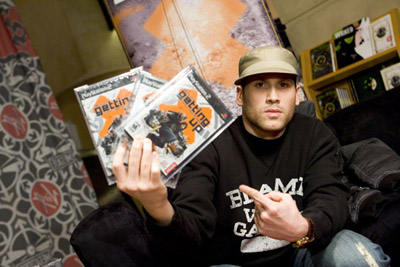 Designer Mark Ecko holds up his new video game, "Getting Up." Careers in video-game design are growing.
© Mat Szwajkos/Getty Images

Being "into" video games is only part of the equation for becoming a game designer. To turn dreams and vision into reality, a prospective game designer needs training and skills.

A video game designer must have a strong set of skills, including programming, video graphics and hardware essentials.

Video games are essentially sophisticated computer software that runs a routine while also accepting commands and data from controllers. Software contains the basic language that brings games to life. To work in the world of video game design, a game designer must be knowledgeable about computer programming and writing software.

Computer animation and graphics also play a huge role in video games, and game designers must have at least some skills in these areas. Graphics is what the player actually sees on the screen, while animation refers to bringing items within a game -- such as characters and background -- to life by putting them in motion. Many players tend to judge the quality of a video game based on realism and creative application of the graphics and animation. If the software program is the "brains" of the game, graphics and animation are its "body."

Video game designers also need a thorough knowledge of the workings of various game consoles like Playstation 3, Nintendo Wii and Microsoft Xbox. Each brand operates in its own way using its own operating characteristics. A video game designer must be aware of these characteristics to ensure their software is compatible with the console for which it's meant. This means game designers must have some familiarity with operating systems, chip design and other factors that determine how a console operates.

Many colleges, technical schools and universities offer classes, certificates and advanced degrees in areas such as computer programming, computer engineering, software development, computer animation and computer graphics. Acquiring accredited training in these areas will show a prospective employer you are serious about your chosen field.

Other, so-called "soft skills" required for video game designers include strong interpersonal and written communications ability, organization, teamwork, an analytical mind and an up-to-date knowledge of the history and trends of video game business and markets.

Now that you know what skills video game designers need, how do you gain experience? Read on to find out.