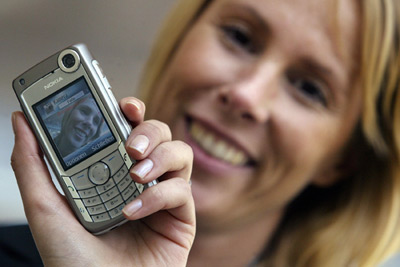 Walk, talk and gawk: This phone model includes a front-facing camera so that users can video chat with each other. See more pictures of cell phones.
David Hecker/AFP/Getty Images

Today it seems everyone has a cell phone. In fact, cell phones may eventually send landlines the way of the dinosaur. As we rely more and more on our cell phones, we want to do more than just talk -- we want to send text messages, e-mail, surf the Internet. And if video conferencing is an option -- well, we'll probably take it.

Imagine being on the phone and being able to watch the other person's facial expressions and body language. Sometimes just a smile or a disinterested look can speak volumes. Video conferencing promises that ability, and the feature isn't far from mainstream grasp. It most likely will become commonplace as cell phone companies embrace 3G technology. 3G, which refers to the third generation of cellular technology, means improved cell phone networks and more advanced features, including video conferencing. Prior cell phone generations -- 1G and 2G -- used analog and digital technology, respectively.

People aren't usually satisfied with just sound or just image. It only took a few decades for sound to be added to movies, making "talkies" the norm. Oddly, however, the telephone didn't follow suit. Though it's been around for over a century, video feeds linked up to sound aren't standard for the telephone. You'd think by now, with all our technological ingenuity, we'd be George Jetson, taking videophone calls at work.

So, what's been the hold up? Why didn't video telephony catch on in the past and what will make it standard now? 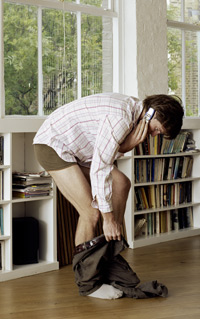 One reason old videophones didn't catch on is because most people don't want to be caught with their pants down.
Andrew G Hobbs/Stone Collection/Getty Images

Why hasn't video telephony hit the mainstream in the U.S. yet, as it has in other countries? For a few reasons, actually -- and, interestingly, it's not for lack of technology. The technology has been around since at least the mid-1960s, when Bell System (now AT&T) presented its "Picturephone" at the World's Fair in New York. The Picturephone gave users a two-way black-and-white video feed between those at the fair and other users in Disneyland.

After complaints about the phone's usability and its small screen, the company continued to tweak the product and held off selling it until 1970 [source: AT&T]. The Picturephone used three wires: one for two-way audio, one for one-way video and one for one-way video going the opposite direction [source: Noll]. When it was released, executives had high expectations for the Picturephone and drooled in anticipation of it becoming a household item in the next decade.

That hunger wasn't satisfied. The Picturephone's hefty price (not to mention its hefty size) prevented it from flying off shelves. AT&T tried again with a different video conferencing phone in 1992, called the Videophone 2500 [source: Noll]. Instead of three wires, it only used one, which meant it had to compress both the audio and video data (a process we'll discuss in detail later). Compression hurt the quality of both the video and the audio, and the product failed to impress consumers.

The problem with the videophone was that it was only useful for the purchaser if his or her friends and family members also owned videophones. Why buy an expensive toy that you can never use? In the end, it was a vicious cycle -- no one was buying it because no one else was buying it.

Many speculate another factor contributed to the videophone's historic flops. It seems people simply didn't care to add a visual to their phone calls -- in fact they preferred no visual at all. One of the things people like about a purely audio phone conversation is that you don't have to worry how you look. You can talk to someone before you've had your morning shower or even in your underwear.

Nonetheless, by the 21st century, people started to embrace a similar technology -- webcams. Webcams enable users to engage in video conversations over a personal computer. With advanced technology and the popularity of the cell phone, the old underdog video telephony has emerged again. Is 3G technology lifting the videophone from the ashes? Read on to find out.

For the hearing impaired, video conferencing for cell phones is much more than a "nice-to-have" feature. It allows them to communicate with friends and family in a way that, for a long time, has been relatively unavailable. With live, two-way video, deaf people can use sign language to easily communicate over a cell phone. And, as the feature becomes more prevalent, they will be able to connect to more people. 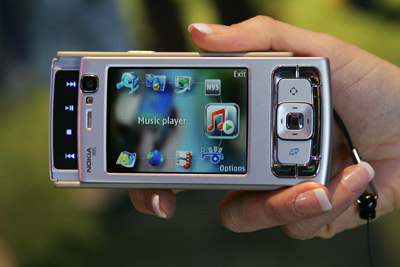 This Nokia phone includes a front-facing camera (to the upper left of the screen) for video conferencing.
Robyn Beck/AFP/Getty Images

It was once thought that people wouldn't be interested in video conferencing cell phones because they couldn't use them on the move (in other words, they'd be walking down the sidewalk bumping into people or lampposts while they tried to use the feature). But the popularity of texting, which is equally as hazardous, eliminated this doubt, and major cell phone companies now are equipping cell phones with the feature and beefing up networks.

The major challenge to transmitting digital video is that it requires sending a great deal of data -- much more data than audio requires. So, a cell phone with video conferencing needs to be able to send and receive a large amount of information. If you've read How Cell Phones Work, you know that, although modern cell phones are digital mechanisms, they send information over radio signals and only have a limited amount of bandwidth with which to work. Bandwidth, which is really a range of frequencies, can be expressed in units -- such as, thousands of bits per second (kbps) or millions of bits per second (Mbps). Bandwidth is an indication of how much (and how fast) data can be sent over a given communication link.

Even with more powerful 3G networks, it would be impractical and time-consuming to send every bit of digital video information over a cell phone link. So, instead, the cell phones employ video compression. This process involves reducing the digital information that needs to be sent -- in essence, whittling the digital file down to a manageable size. Compression can involve finding repetitive information and using shortcut code. The receiving cell phone would then simply need to decode the shortcuts and expand the file again.

Video compression can also mean discarding information. We can easily part with much of this information because it's simply imperceptible to the human eye. Often, to make the digital file small enough, compression discards so much information that the quality of the video noticeably suffers.

Because digital video compression is essential, experts constantly work toward inventing compression methods that reduce the information without degrading video quality. Video can be compressed in two ways:

In an effort to standardize compression methods across companies and industries, the Moving Picture Experts Group has come up with standards, such as the MPEG-4, which employs the object-based method.

Improved video compression is an example of better spectral efficiency (getting the most out of limited bandwidth), which is what makes 3G cellular technology more advanced than its predecessors. Another important factor that has made 3G phones possible is the development of microchips that do more (including video compression) without sucking power from the phone's battery. These are known as high-performance, low-power microchips.

But it takes more than these technological advances to make video conferencing cell phones a reality. On the next page, we'll take a look at 3G network availability. Without it, you won't be talking face to face with anyone via cell phone. 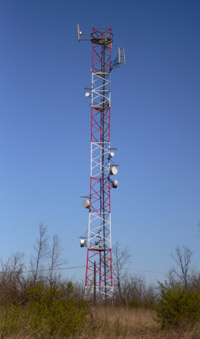 Gearing up for a 3G world: Phone companies must strengthen their cell phone towers for new features. ­
©iStockPhoto/Gabor Izso

Now that we know what technology cell phones need for video conferencing, let's take a look at the networks needed to carry the information. As we mentioned earlier, sending video data involves transmitting a great deal of information. More powerful cell phone networks allow us to relay more information than we could with 2G technology.

As cell phone companies update their transmission towers with powerful 3G equipment, the networks can carry more information faster. Specifically, they allow users to send between 144 kbps and 2.4 Mbps [Source: Patterson]. These speeds make it possible to video conference with the person you're calling.

But if you rush out and buy a 3G-capable phone, don't expect to turn it on and immediately talk face to face with a friend. Your ability to use video conferencing depends not only on whether you have a phone with that feature, but also on whether a 3G network is available in your area. Now that cell phone companies like AT&T, Sprint and Verizon have decided there's a market for video conferencing and other 3G features, they're working to make it available. But they'll start this process in urban areas, like New York or Los Angeles before they eventually make 3G available all over the U.S.

People living in Japan, on the other hand, are already using the service -- and have been using it for a while. Japan and Europe are (in some ways) ahead of the U.S. when it comes to cellular technology. The reason is that Japan and these European countries are geographically smaller than the U.S. It takes fewer 3G cell phone towers to cover everyone in Japan than it does to cover everyone in the U.S. In addition, some theorize that Americans are slower to invest in advanced cell phone features because the U.S. has such reliable landline service compared to the rest of the world [source: Bora].

Will the vicious cycle be broken? Will Americans still refuse to cough up extra cash for video conferencing cell phones, thinking family and friends won't buy them?

Many think that when video conferencing is included on popular phone models more people will have the feature and therefore more people will want the feature. Rumors floated around that Apple would include video conferencing on its second generation of iPhones. But that was just a pipe dream -- the new iPhone will not include that feature, though it does include other 3G features.

Who's to say whether video conferencing will ever become as standard in the U.S. as text messaging? For more information on your cell phone and other telecommunications devices, investigate the links on the next page.

Why Japan Is Winning the Cell Phone Race

Another reason Japan is farther ahead with 3G service is because the Japanese actually rely on cell phones more so than much of the world. In Japan, personal computers are less prevalent (than in the U.S., for example) and at-home Internet access is expensive [source: Rogers]. So, the Japanese use cell phones like many Americans use laptops -- for Internet surfing and e-mail. On the other hand, many U.S. citizens still use their cell phones mainly for talking and text messaging.