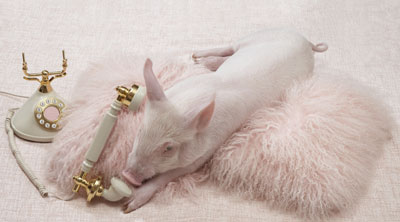 Is a family member hogging the phone? You can solve the problem with a two-line phone.
Bob Elsdale/Getty Images

If you grew up in a household with a family member who monopolized the phone, then you don't need someone to sell you on the wonders of having multiple phone lines. Beyond not having to worry about the queen of gab tying up the line, two-line phones can enable someone working from home to have a separate line dedicated to business calls.

Business travelers can't live without the things. Two-line phones are a standard feature in most hotels, alongside Internet access, hookups for your MP3 player and ergonomic chairs. The phones also allow dial-up Internet users to surf the Web and catch up on gossip simultaneously. Two-line phones incorporate two separate phone lines (two different phone numbers) into one device.

If you own one of these phones, you may have wondered how two separate phone lines could originate from one device. After all, single-line and two-line phones look remarkably alike, and they plug in the same way. Where's the magic?

Pull the phone cord out of the jack and look at it closely. You'll probably see four wires inside. Some phone cords have more and some less, but the standard number is four. If this is the case with your cord, then surprise, your business or residence is ready for two lines. It turns out that one phone line only requires two of those wires, so you have two to spare. To activate the second line, all you have to do is contact the phone company and ask a representative to enable the other two wires for your second line.

In this article, you'll learn how callers can make use of two phone lines on the same phone. The next time your other line rings in the middle of your family member's marathon discussion, you'll know a little more about the mechanics of what's going on. Next, find out how two-line phones operate so you don't miss a single call.