Are thin-screen TVs more fragile than rear-projection or CRT TVs? 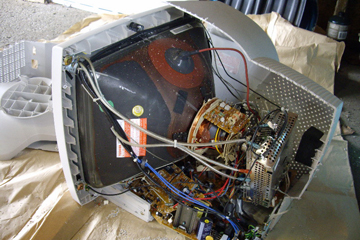 In this "cutaway view," it's easy to see how large the glass tube of a CRT screen is.
Photo by Ed Grabianowski

Technological advances have rendered old, bulky televisions obsolete. Built around cathode-ray tubes (CRTs), these sets had one fatal flaw -- as screen size increased, so did the bulk and mass of the TV itself.

CRT TVs were also bulky because the electron guns that fire electrons at the inside of the screen need a certain angle of attack to work properly. With a large screen, the guns need to be farther away to achieve this angle with respect to the outer screen edges. Moving the electron guns farther back meant making the TV itself that much larger.

Today, LCD and plasma high-definition TVs not only have better picture quality than old CRT TVs, they're less bulky and weigh far less. But a number of factors have made it more likely that our TVs will suffer damage. For one thing, their light weight makes them more susceptible to being bumped off of their stands or tables. People are also more active around their TVs these days, thanks in part to gaming consoles like the Nintendo Wii.

But are these newer TV technologies inherently fragile? Are they more likely to break or shatter than the CRTs of old? The author tested some old CRTs by throwing things at them and even smashing them with a hammer. Then we compared the technical specifications of a CRT with those of an LCD or plasma screen to find out the crucial physical differences that might make a newer TV more susceptible to damage. 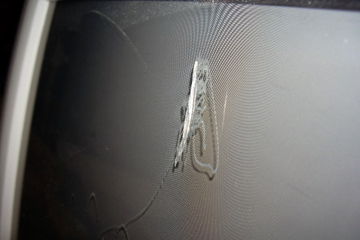 After about 10 minutes using the cutting attachment of a rotary tool on the CRT, the author finally gave up.
Photo by Ed Grabianowski

We started our experiment with some CRT computer monitors that were headed for the recycling plant -- they were stand-ins for CRT TVs (their construction is essentially the same for our purposes). For the first test, the author threw a TV remote with the batteries still in it at the screen as hard as possible -- full-wind-up, Major-League-Baseball-style. The CRT screen got a small scratch that rubbed right off. The remote -- well, the author never did find where it landed. It's somewhere in his garage.

For the second test, the author hit the screen with a 48-ounce (1.4-kilogram) lead hammer. He didn't just tap it, he swung and slammed the hammer into the screen repeatedly. The screen did get some nasty marks and scratches, but it wouldn't shatter. Finally, the author took a cutting tool directly through the screen. After several minutes of cutting, he still hadn't sliced all the way through the glass.

The bottom line? If you have a standard-definition TV with a CRT screen, and you're a particularly demonstrative Wii bowler or tennis player, you'll still want to use the wrist strap, but only for the protection of the Wii Remote and any bystanders, not necessarily for the safety of your TV. In fact, anecdotal evidence shows that CRTs can survive drops from garage roofs and from moving cars without the tube cracking, exploding or imploding (but they won't stop a bullet).

What makes CRTs so tough? For one thing, they're made of fairly thick glass, 10 mm or more depending on the TV or monitor [source: Society of Photographic Instrumentation Engineers]. Perhaps more importantly, they aren't just sheets of glass -- a CRT screen is a large vacuum tube, sort of like a giant light bulb. This gives it a certain structural strength that a flat sheet of glass doesn't possess. Indeed, the fact that there's a vacuum inside a CRT tube is part of the reason for the thickness of the glass. It needs to be strong enough to resist imploding. The bigger the tube, the thicker the glass has to be.

Of course, there are many electronic components inside a CRT TV, so subjecting it to serious impacts can easily damage those components and ruin the TV, even the screen isn't cracked. There may also be toxic compounds inside old TVs, and certain components can hold a strong electrical charge even if the TV is off and unplugged. Be careful with your old TVs, especially if they're damaged!

In other words, don't try our experiments at your own home.

There are several key differences between LCD and plasma screens and CRTs. Both types actually contain two glass screens -- a front screen, which is what you look at, and a rear screen, which is part of the process of generating the images displayed on the front screen. If either screen breaks, the TV won't work.

LCD and plasma screens use flat sheets of glass, rather than tubes like those used in CRTs. They don't have the structural strength of a curved piece of glass. They're also much thinner. Plasma TVs have screen thicknesses of less than 2 mm [source: Panasonic]. Are they more fragile than CRTs? We didn't have the heart to smash anyone's high-definition TV to find out, but logic would suggest that yes, these types of screens are more susceptible to damage. In addition, there's plenty of evidence on the Internet of people who have cracked the screens on their plasma or LCD TVs with an inadvertantly hurled Wii Remote.

As to the question of whether or not they can be dislodged from their display stands more easily, we again turn to common sense in the absence of experimental evidence that could only be obtained by knocking a bunch of nice TVs off their stands. Lighter objects slide more easily than heavy ones of the same general profile. Plasma and LCD TVs actually have a smaller profile -- less of their bottom surface is in contact with the stand below them, so there's less friction to keep them in place. Also, as LCD and plasma TVs get bigger, they don't get thicker. That means that a very large screen TV will be tall but thin, an inherently unstable form factor. For larger TVs, most manufacturers include straps and screws to secure the TV directly to the stand and the wall behind it for exactly this reason.

Just like CRTs, newer types of TVs have many sensitive electronic components. It's even possible to damage an LCD screen in such a way that it still works, but there are "dead pixels," regions of the screen that no longer function and stay black. All types of TVs carry and store a lot of electricity when they're operating -- when something goes wrong, occasionally there can be a large discharge of energy. This can result in a burning smell or even smoke, but it's rare for a TV to actually catch fire due to a malfunction.

For more information on high-definition televisions and related technologies, smash your way over to the next page.