Chunks of the Frequency Range 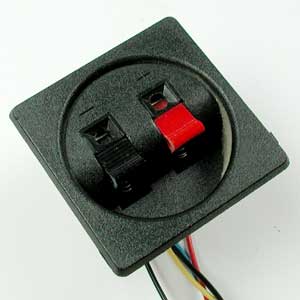 To produce quality sound over a wide frequency range more effectively, you can break the entire range into smaller chunks that are handled by specialized drivers. Quality loudspeakers will typically have a woofer, a tweeter and sometimes a midrange driver, all included in one enclosure.

Of course, to dedicate each driver to a particular frequency range, the speaker system first needs to break the audio signal into different pieces -- low frequency, high frequency and sometimes mid-range frequencies. This is the job of the speaker crossover.

When the electrical audio signal travels through the speaker wire to the speaker, it passes through the crossover units for each driver. To flow to the tweeter, the current will have to pass through a capacitor. So for the most part, the high frequency part of the signal will flow on to the tweeter voice coil. To flow to the woofer, the current passes through an inductor, so the driver will mainly respond to low frequencies. A crossover for the mid-range driver will conduct the current through a capacitor and an inductor, to set an upper and lower cutoff point.

Crossovers and drivers can be installed as separate components in a sound system, but most people end up buying speaker units that house the crossover and multiple drivers in one box. In the next section, we'll find out what these speaker enclosures do and how they affect the speaker's sound quality.