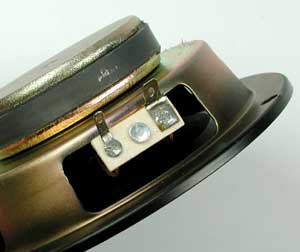 The wire that runs through the speaker system connects to two hook-up jacks on the driver.

When the electrical current flowing through the voice coil changes direction, the coil's polar orientation reverses.

The voice coil is a basic electromagnet.

If you've read How Electromagnets Work, then you know that an electromagnet is a coil of wire, usually wrapped around a piece of magnetic metal, such as iron. Running electrical current through the wire creates a magnetic field around the coil, magnetizing the metal it is wrapped around. The field acts just like the magnetic field around a permanent magnet: It has a polar orientation -- a "north" end and and a "south" end -- and it is attracted to iron objects. But unlike a permanent magnet, in an electromagnet you can alter the orientation of the poles. If you reverse the flow of the current, the north and south ends of the electromagnet switch.

This is exactly what a stereo signal does -- it constantly reverses the flow of electricity. If you've ever hooked up a stereo system, then you know that there are two output wires for each speaker -- typically a black one and a red one.

Essentially, the amplifier is constantly switching the electrical signal, fluctuating between a positive charge and a negative charge on the red wire. Since electrons always flow in the same direction between positively charged particles and negatively charged particles, the current going through the speaker moves one way and then reverses and flows the other way. This alternating current causes the polar orientation of the electromagnet to reverse itself many times a second.