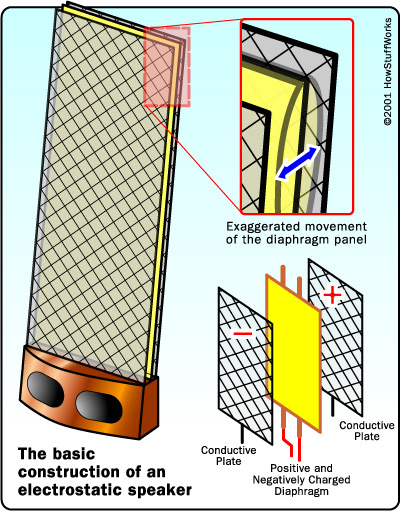 Most loudspeakers produce sound with traditional drivers. But there are a few other technologies on the market. These designs have some advantages over traditional dynamic speakers, but they fall short in other areas. For this reason, they are often used in conjunction with driver units.

The most popular alternative is the electrostatic speaker. These speakers vibrate air with a large, thin, conductive diaphragm panel. This diaphragm panel is suspended between two stationary conductive panels that are charged with electrical current from a wall outlet. These panels create an electrical field with a positive end and a negative end. The audio signal runs a current through the suspended panel, rapidly switching between a positive charge and a negative charge. When the charge is positive, the panel is drawn toward the negative end of the field, and when the charge is negative, it moves toward the positive end in the field.

In this way, the diaphragm rapidly vibrates the air in front of it. Because the panel has such a low mass, it responds very quickly and precisely to changes in the audio signal. This makes for clear, extremely accurate sound reproduction. The panel doesn't move a great distance, however, so it is not very effective at producing lower frequency sounds. For this reason, electrostatic speakers are often paired with a woofer that boosts the low frequency range. The other problem with electrostatic speakers is that they must be plugged into the wall and so are more difficult to place in a room.

Another alternative is the planar magnetic speaker. These units use a long, metal ribbon suspended between two magnetic panels. They basically work the same way as electrostatic speakers, except that the alternating positive and negative current moves the diaphragm in a magnetic field rather than an electric field. Like electrostatic speakers, they produce high-frequency sound with extraordinary precision, but low frequency sounds are less defined. For this reason, the planar magnetic speaker is usually used only as a tweeter.

Both of these designs are becoming more popular with audio enthusiasts, but traditional dynamic drivers are still the most prevalent technology, far and away. You'll find them everywhere you go -- not only in stereo setups, but in alarm clocks, public address systems, televisions, computers, headphones and tons of other devices. It's amazing how such a simple concept has revolutionized the modern world!

For more information on speakers and related topics, check out the links below.