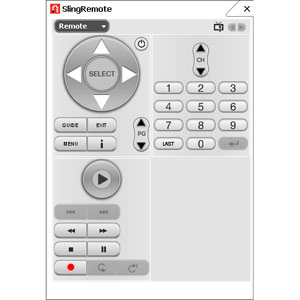 Slingbox works in conjunction with the SlingPlayer software you install on your computer. Together, they "sling" NTSC or PAL video data to another location. It works with regular TV, satellite TV, cable TV, a DVD player, DVR or camcorder. It also works with Apple TV boxes and iPods that are docked in either an Apple Universal Dock or an Apple iPod Hi-Fi. If it's NTSC (the video broadcast standard in the United States) or PAL/SECAM (the dominant standards outside the United States), you can sling it. See How Video Formatting Works to learn about NTSC, PAL and SECAM formats.

The coolest part of the Slingbox setup is that you can fully control the video source from your computer. The SlingPlayer has thousands of remote-control codes built in, and you can chose a virtual remote that looks just like the remote sitting on your coffee table.

Sitting in your office or in a WiFi coffee shop on the other side of the world, you can change the channel on your TV, fast forward through programs on your DVR and adjust the contrast of your TV picture. There are no subscription fees, just a one-time purchase price for the hardware (between $179 and $299, depending on the model) and software (free for PC or Mac -- for mobile phones, a one-time license fee of $29.99 per device). You can install the SlingPlayer software on as many devices as you want, but only one device can access the Slingbox at a time.

To sling your TV programming, you need the following equipment in addition to the Slingbox:

At least a 24-bit graphics card

At least a 16-bit sound card

High-speed Internet connection (for remote use)