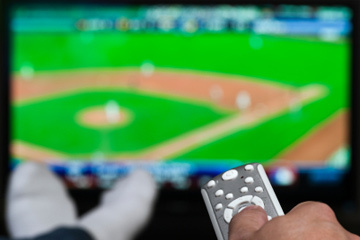 A scanning backlight can help reduce blur on televisions -- a great feature when you watch a lot of sports.  See more HDTV pictures.
© iStockphoto.com/Pgiam

Diving into shopping for an HDTV can be an unnerving experience. Not only do you need to become familiar with a new vocabulary of jargon, but you also have to choose between competing HDTV technologies. Should you get a projection television? Do you want a flat panel TV set? Is the plasma television the right fit for you or should you buy an LCD TV?

As you work your way through all the details, you'll learn about the various strengths and weaknesses of each technology. In general, plasma televisions consume more power and take longer to warm up than LCD sets. But plasma televisions tend to be more adept at displaying fast-moving objects clearly and have a better contrast ratio than LCD displays. What gives plasma televisions the advantage?

Part of the reason is that LCD televisions have a backlight. That is, they have a light that shines from the back of the set toward the screen. An LCD television works by sending electric impulses to millions of tiny liquid crystals. The crystals change shape in response to the electrical current and allow light to pass through. The action we see on an LCD display is really the coordination of all of these tiny liquid crystals.

But this technology has a downside, too. For most LCD sets, the backlight is on whenever the television is on, even if the screen is dark. In other words, in a completely dark room, you'd still be able to see the outline of a normal LCD television screen even when it's supposed to be completely black. That means for many LCD televisions, the difference between the brightest whites and the darkest blacks isn't as great as it would be for a plasma television -- plasma TVs don't use a backlight.

Backlights also can contribute to motion blur on LCD screens. The constant backlight interferes with the display of fast-moving objects. In some cases, you may even see trails following behind particularly rapid objects on the screen.

Manufacturers of LCD televisions try to reduce blur using several different methods. One of those is the scanning backlight.

Unlike standard backlights, a scanning backlight doesn't stay on all the time. Instead, the light activates when and where it's needed to produce images. By switching on and off very quickly -- hundreds of times per second -- the light can reduce blur and improve contrast at the same time.

Because the light can adjust to the images on the screen, it can shut off when part or all of the screen switches to black. This makes the black images darker and much more distinct versus what you would see on a traditional LCD television. When coupled with an HDTV with a fast refresh rate, you should also notice a reduction in blur.

Not every LCD HDTV uses a scanning backlight. In fact, even in sets that do have one, you may need to adjust your television's settings to activate the feature. Meanwhile, refresh rates continue to climb: Standard-definition television screens refresh 60 times a second, whereas recent HDTV televisions refresh as many as 480 times per second. While television manufacturers claim the higher refresh rates translate into smoother displays of fast action, the individual viewer may have difficulty telling the difference between a high-end model and an ultra-high-end model. Before investing your money in a bleeding-edge television set, you may want to take a careful look to make sure you can actually detect an advantage.

Learn more about HDTVs by following the links on the next page.

5 Things to Do Before Buying an HDTV
How do I calibrate my HDTV?
TV Signals Roundup