The world's first remote controls were radio-frequency devices that directed German naval vessels to crash into Allied boats during WWI. In WWII, remote controls detonated bombs for the first time. The end of the great wars left scientists with a brilliant technology and nowhere to apply it. Sixty years later, some of us spend an hour looking for the remote before we remember there are buttons on the TV.

In this article, we'll examine the infrared technology used in most home theaters, look at the difference between IR and RF remotes, find out the difference between a "universal" and a "learning" remote and check out some of the other high-tech features you can find on remotes today, like PC connectivity, RF extenders and macro commands.

An IR remote control (the transmitter) sends out pulses of infrared light that represent specific binary codes. These binary codes correspond to commands, such as Power On/Off and Volume Up. The IR receiver in the TV, stereo or other device decodes the pulses of light into the binary data (ones and zeroes) that the device's microprocessor can understand. The microprocessor then carries out the corresponding command.

To get a better idea of how the process works, let's take a look inside a typical remote control -- the universal remote that came with the author's digital cable box. The basic parts involved in sending an IR signal include:

To find out more about the parts on a remote-control circuit board, check out Inside a TV Remote Control.

On the component side, the infrared receiver sits on the front of the device where it can easily see the signal coming from the remote control.

You've probably noticed that some remotes only work when you're pointing them directly at the receiver on the controlled device, while others work when you're pointing them in the general vicinity of the receiver. This has to do with the strength of the transmitting LED. A remote with more than one LED and/or a particularly powerful LED produces a stronger, broader signal.

Now let's find out how these parts work together to allow pulses of light to change the channel on a cable box. 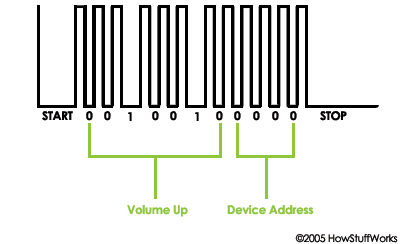 Sony TV remotes use a space-coding method in which the length of the spaces between pulses of light represent a one or a zero.

Pushing a button on a remote control sets in motion a series of events that causes the controlled device to carry out a command. The process works something like this:

One example of remote-control codes is the Sony Control-S protocol, which is used for Sony TVs and includes the following 7-bit binary commands (source: ARRLWeb):

The remote signal includes more than the command for "volume up," though. It carries several chunks of information to the receiving device, including:

So when you press the "volume up" button on a Sony TV remote, it sends out a series of pulses that looks something like this:

When the infrared receiver on the TV picks up the signal from the remote and verifies from the address code that it's supposed to carry out this command, it converts the light pulses back into the electrical signal for 001 0010. It then passes this signal to the microprocessor, which goes about increasing the volume. The "stop" command tells the microprocessor it can stop increasing the volume.

Infrared remote controls work well enough to have stuck around for 25 years, but they do have some limitations related to the nature of infrared light. First, infrared remotes have a range of only about 30 feet (10 meters), and they require line-of-sight. This means the infrared signal won't transmit through walls or around corners -- you need a straight line to the device you're trying to control. Also, infrared light is so ubiquitous that interference can be a problem with IR remotes. Just a few everyday infrared-light sources include sunlight, fluorescent bulbs and the human body. To avoid interference caused by other sources of infrared light, the infrared receiver on a TV only responds to a particular wavelength of infrared light, usually 980 nanometers. There are filters on the receiver that block out light at other wavelengths. Still, sunlight can confuse the receiver because it contains infrared light at the 980-nm wavelength. To address this issue, the light from an IR remote control is typically modulated to a frequency not present in sunlight, and the receiver only responds to 980-nm light modulated to that frequency. The system doesn't work perfectly, but it does cut down a great deal on interference.

While infrared remotes are the dominant technology in home-theater applications, there are other niche-specific remotes that work on radio waves instead of light waves. If you have a garage-door opener, for instance, you have an RF remote. 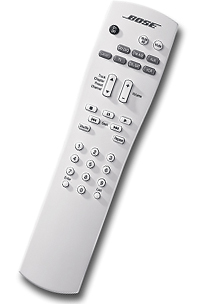 Radio-frequency (RF) remote controls are very common. Garage-door openers, car-alarm fobs and radio-controlled toys have always used radio remotes, and the technology is starting to show up in other applications, too. They're still pretty rare in home-theater devices (with the exception of RF extenders, which we'll discuss on the next page), but you will find RF remotes controlling certain satellite-TV receivers and high-end stereo systems. You'll also find Bluetooth-based remotes that control laptops and smartphones. (See How Bluetooth Works to learn about this radio technology.)

Instead of sending out light signals, an RF remote transmits radio waves that correspond to the binary command for the button you're pushing. A radio receiver on the controlled device receives the signal and decodes it. The problem with RF remotes is the sheer number of radio signals flying through the air at any given time. Cell phones, walkie-talkies, WiFi setups and cordless phones are all transmitting radio signals at varying frequencies. RF remotes address the interference issue by transmitting at specific radio frequencies and by embedding digital address codes in the radio signal. This lets the radio receiver on the intended device know when to respond to the signal and when to ignore it. To learn more about the technology of radio-frequency remotes, check out How Remote Entry Works.

The greatest advantage to radio-frequency remotes is their range: They can transmit up to 100 feet from the receiver (the range for Bluetooth is shorter), and radio signals can go through walls. This benefit is why you'll now find IR/RF remotes for home-theater components. These remotes use RF-to-IR converters to extend the range of an infrared remote.

In the next section, we'll talk about RF extenders and other special remote-control features. 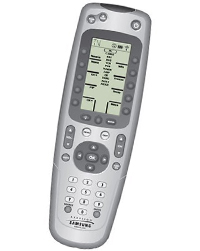 Today's home-theater remotes do a lot more than turn a component on and off and control the volume. Here are just a handful of the features you can find on some of the higher-tech remote controls out there.

Different electronics brands use different command codes. Some IR remotes are preprogrammed with more than one manufacturer's command codes so they can operate multiple devices (sometimes up to 15) of different brands. If your home-theater setup incorporates components from, say, three different manufacturers, you can either use three different remotes to operate your system or use one universal remote. To add functions to a universal remote, you need to know the command codes for the component you want to control. You can look these up online or find them in the manual that came with your remote.

A macro is a series of commands that you program to occur sequentially at the push of a single button. These macros can be anything you want, such as an "activity command." You can set up a macro that lets you push one button to activate, in order, everything that needs to happen for you to watch a movie or listen to a CD. (Some remotes come with "activity commands" preprogrammed, and others let you download macros from the Internet.)

There are remotes that connect to your PC via the USB port so you can install programming software and download command codes and personalized graphic icons (for remotes with LCD screens).

A remote-control LCD screen may simply display data, or it may be a touchscreen that receives user input.

Most remotes still utilize the simple button-pushing method, but some have more high-tech manners of inputing commands. You'll find remotes that you operate via an LCD touchscreen, a joystick (for directional commands) and even voice commands.

Some IR remotes can send out both IR and RF signals. The RF signals aren't meant to control RF devices (in fact, they can't control them). They're meant to extend the operating range of the IR remote control from about 30 feet to about 100 feet (give or take) and allow the signal to penetrate walls and glass cabinet enclosures. The remote automatically transmits both IR and RF signals for every command. When you hook up an RF-to-IR converter (sometimes included with IR/RF remotes, sometimes sold as add-ons) on the receiving end, it receives and converts the signal back into the infrared pulses the device can understand. Now you've got an IR remote that can increase the volume on your home-theater stereo from your bedroom upstairs.

Remote controls are steadily increasing the number of devices and functions they can manage. Some universal remotes intended for home-theater components can learn commands for wirelessly controlled lights, so they will not only start a movie at the push of a button, but they'll also dim the lights for you. Full home-automation systems let you use one remote control to manage lighting, alarm systems and entertainment components by way of a receiver wired directly into your home's electrical wiring. Chances are it won't be long before you have a single remote control to manage every electronic device in your life.

For more information on remote controls and related topics, check out the links on the next page.