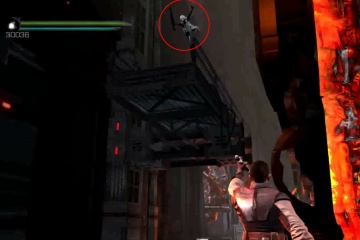 Whipping enemies around with the Force and watching them flip and flop is half of the fun of the game play in “The Force Unleashed.”
Screen capture by HowStuffWorks staff

Ragdoll physics is just one aspect of building realistic animation. Many games use skeletal animation to provide character realism. Skeletal animation involves two primary elements including the surface or mesh (the skin or armor you can see) and the rig or skeleton (the rigid underlying construction that supports the skin and makes it move). This is an articulated body — rigid parts connected with joints.

Programmers build in limits and constraints for the rig. A head, for example, can't swivel 360 degrees or flop into the chest area. Wrists can rotate and swing, but only to certain angles and then they stop, just like on a real person.

Once the skeletal system for a game is built, developers can use the same foundation for multiple characters, simply changing the surface appearance to flesh out the population of the virtual world.

As with a real skeleton, skeletal animation is based on kinematic chains or trees, so the pieces move as part of a hierarchy. In short, this just means that all of the "bones" are connected. For example, when the bone of an upper thigh moves, so too does the lower leg.

It's difficult to program this kind of action-reaction movement in a digital character. Developers use various techniques to accomplish the feat. One common way is based on Featherstone's algorithm, named after Roy Featherstone, an expert in articulated-body algorithms.

This dynamic modeling requires a lot of data to make a character look believable. Programmers need to account for geometry and the relative locations of all body parts. The have to create restrictions and rules for joints and connectivity, as well as spatial inertia.

All of those factors must be described with mathematical algorithms and physics. Animators then use CAD-like software to build geometrical characters, joint by joint, until they've literally constructed a digital being. Then that being can be inserted into a digital environment.

No matter who makes them, physics are what drive modern video games. Whether those physics are fantastically real or gut-achingly funny doesn't matter as much as simply making the games more enjoyable to play. And with ever bigger budgets and more powerful hardware on their hands, you can expect that the physics engines will get more sophisticated and elegant by leaps, bounds and bullet holes.

I grew up playing games like "Ikari Warriors" and "King's Quest," both of which featured blocky animation that looks downright rudimentary by today's standards. There were no dynamic graphics in those days. The characters hovered their way through the polygon-ish landscape in search of victory or perhaps a way to escape their two-dimensional hell. Contemporary gamers are spoiled by graphics so convincing that the digital world becomes a secondary life. And now that I remember how addicted I was to even old-school video games, maybe it's best that I missed out on this era of gameplay.