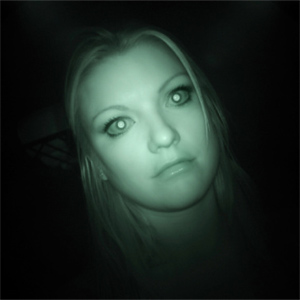 A spooky picture like this, shot with infrared, could be yours if you bust out your camera after the sun goes down.
Comstock Images/Thinkstock

Looking to do a little ghost hunting? In the mood to re-enact your favorite scene from "Predator"? Whatever your pleasure -- from security to nature-watching to artistic expression -- there's a night-vision camera for you.

Nighttime photographers entered the picture in 1871, when Richard L. Maddox developed a photographic plate that was finally up to the task. Early photographers captured images on wet plates -- panes of glass coated with chemicals -- which were touchy and cumbersome and required exposure times that made night photography impractical. Maddox's gelatin dry plate changed all that, becoming the first medium capable of capturing nocturnal cityscapes [sources: Encyclopaedia Britannica; Schwendener].

As time passed and interest spread, legendary photographers such as Alfred Stieglitz, George Brassaï, Weegee and Diane Arbus brought better cameras, improved film and special development techniques to bear. These famed photogs peeled back the curtain of night not with night vision, but with the glow of city lights, illuminated signs, moonlight and the occasional flashbulb.

By the 1970s, Japanese photographers such as Kohei Yoshiyuki were stalking city parks at night, capturing voyeuristic tableaux with their infrared (IR) film and filtered flashbulbs. The era of true night-vision image capture had begun, and both criminals and young lovers would never be safe again [source: Schwendener].

From World War II to today, the U.S. armed forces have driven night-vision tech. As the military turns out incrementally better night-vision scopes, the technology finds its way into civilian cameras. Most prominently, closed-circuit security grew from its infancy in the 1970s to become commonplace by the 1990s [sources: Demetriadi; National Archives; Roberts].

Today, night vision is most widely available in security cameras. Some work only at night, while others switch modes based on user input or ambient light. Surveillance rigs can run from $18 for a 0.5-lux low-light camera to $3,670 for a top-of-the-line thermal imaging model (lux measures the minimum light a camera needs to pick up an image, so lower = better) [source: Brickhouse].

Out-of-the-box night-vision photography cameras are rare. The Midnight Shot NV-1, a dual-mode, digital color/IR camera offered through ThinkGeek for $99.99-$149.99, was the only exception we could find in 2012. In most cases, photographers turn instead to IR film, IR lights and special filters, or hack their digital cameras to capture IR (more on that later). Night-vision adapters for photographic and video cameras offer a simpler approach, but will set you back a cool $6,840-$10,819. Thermal imaging cameras, such as the FLIR T series, break the bank at $8,450-$14,294.

Whatever your shopping selection, your camera will use one of two basic approaches to see in the dark: It will either amplify dim visible light, such as the ambient nightglow of the moon and stars, or gather electromagnetic radiation types that humans can't perceive, such as infrared.

It makes sense that we would end up taking these two approaches; after all, that's how Mother Nature does it.