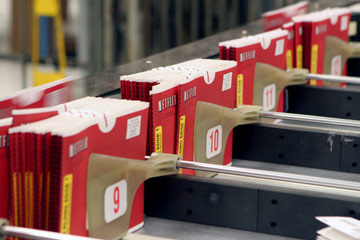 In the early days of Netflix, the company had one major advantage over its rent-by-mail competitors. While other companies had one central distribution center, Netflix had several scattered around the United States. This cut down on the amount of time that customers' DVDs spent in transit. Today, Netflix has distribution centers strategically located throughout the United States and Canada. This allows 90 percent of subscribers to get their DVDs the day after Netflix ships them. The return trip takes the same amount of time.

Netflix also processes nearly all of the DVDs it receives on the day they arrive. Each weekday, the United States Postal Service (USPS) delivers thousands of DVDs to each Netflix shipping center. Employees open the envelopes and scan a UPC barcode on the sleeve contained the DVD. The Netflix inventory system automatically updates the subscriber's queue and sense an e-mail message reporting that the DVD has arrived. An employee then inspects the DVD to make sure it isn't broken or too damaged to play and returns it to the shipping center's inventory.

For the most part, this process, with its one-day delivery and same-day processing, is fairly efficient. It allows Netflix to deliver 1.5 million DVDs through the USPS every day; Netflix delivered its billionth DVD on February 25, 2007. However, a number of factors can affect which DVDs you get and when you get them. One is the rarity of the DVD. If there aren't copies in the system, Netflix may have to ship one from a center that is far from where you live. Another is the popularity of the movies you want to watch. For newly-released films, Netflix may have fewer copies of the film than there are people who want to see it. In some cases, new releases have wait times of days or weeks.

If you watch lots of DVDs from Netflix every month, it may also take longer for you to get to the top of the waiting list for extremely popular movies. According to Netflix, this is to give the best possible service to all customers. However, critics of the practice refer to it as throttling and say that it puts Netflix's best customers at a disadvantage. Although Netflix claims it has always given its least-frequent renters the highest priority for new titles, it didn't always disclose this fact in its terms of use. For this reason, the throttling debate led to a class-action lawsuit -- Frank Chavez v. Netflix Inc. -- by users who accused the company of wrongdoing.

In the 2005 settlement of the case, Netflix provided a month free service to members, and it added appropriate language to its terms of service. Today, the "DVD Terms of Service" includes the following language: "In determining priority for shipping and inventory allocation, we may utilize many different factors, including the number and type of DVDs you rent through our service, the membership plan you select, as well as other uses of our service by you."

Subscribers have also questioned the quality of the Netflix shipping process. DVDs travel to subscribers' homes and back in plain, unpadded envelopes, and many discs spend a lot of time being handled and shipped. For these reasons, some people receive broken, scratched or otherwise unplayable DVDs. Critics claim that Netflix uses inadequate packaging to improve its bottom line and even accuse the company of willfully distributing defective discs. However, Netflix has been a member of the Better Business Bureau since 2001, and it's currently a Better Business Bureau Accredited Business with an A+ rating.

Though the red envelopes have been the heart and soul of Netflix since its inception, online content streaming has transformed the business. Let's check out Netflix streaming and device availability next.

In January 2007, Netflix announced that it was beginning a six-month roll-out of a new video-on-demand service. The Watch Now service allows subscribers to watch movies in a streaming format for a certain number of minutes each month, depending on their subscription plans. This service works only on computers running Microsoft Windows XP Service Pack 2 or Windows Vista. It also requires a broadband Internet connection and Internet Explorer 6.0 or better.