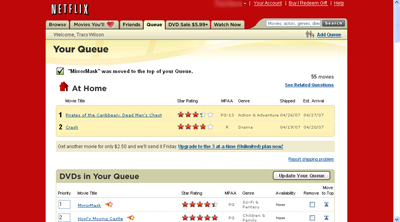 The two most visible parts of the Netflix enterprise are the red mailing envelopes and the Web site. The patented envelope is essentially an ordinary mailing envelope with an extra long, removable flap. This extra length of paper is what lets DVDs make the round trip from the Netflix distribution center to your home in just one envelope. When the envelope travels to you, the flap displays your address while covering up the shipping center's return address. You remove the flap when you seal the envelope to return it to Netflix, so only the shipping center's address remains.

The envelope has been through several revisions as Netflix has refined its shipping methods and tried to become more profitable. These include the following:

The Netflix Web site has been through numerous revisions as well. The company has made major changes to the site as often as every two weeks, constantly evaluating how the changes affect the business. Numerous features have come and gone, but for the most part, the site has looked a lot like other online retail stores. The available movies appear as thumbnail images, sometimes in conjunction with a brief description. When you hold your mouse pointer over a selection, the site pulls a lengthier description from a database and displays it on the screen. This description includes information about the movie's plot, cast and MPAA rating. Clicking on a title takes you to a separate page with cast and crew information, technical specifications. Rating information from Common Sense Media, a separate company with its own Web site, is also displayed.

You can browse the section by genre, check out the Critic's Picks and Award Winners, or use the Netflix Top 100 to decide which movies you want to see. You can also use the Friends feature to see what your friends are watching and compare which movies you like. When you find a movie you want to see, you add it to either your DVD or your Instant queue. If you want to see a movie that Netflix doesn't have in its inventory yet, you can save it for later. Netflix ships DVDs in the order in which they appear in your DVD queue, and you can change the order or remove items in your queues as often as you want.

As you browse, you have three options for each movie you see on the site. You can give it a star rating, add it to one of your queues or tell Netflix that you're not interested in it. The choices you make dramatically affect which movies Netflix features on the site when you visit. Next, we'll take a look at the Netflix recommendation engine and how it works.

Netflix envelopes are solid red, so they stand out from the rest of the mail. This may make it easier for thieves to steal other people's DVDs. In 2006, newspapers featured stories of postal employees borrowing or stealing hundreds of Netflix DVDs from customers on their routes. New York Magazine reported that a postal worker in Lyons, Colorado, stole 503 discs before being arrested.