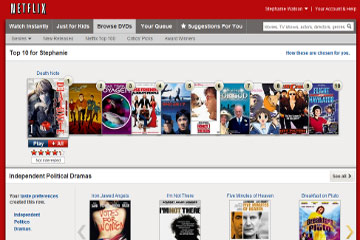 Netflix's Top 10 and other suggestions for you are based on your viewing habits.
Screenshot by Stephanie Watson for HowStuffWorks

The Netflix Web site makes these recommendations automatically using a recommendation algorithm. This algorithm instructs Netflix's servers to process information from its databases to determine which movies a customer is likely to enjoy. The algorithm takes these factors into account:

The first algorithm behind these recommendation was called CineMatch. The CineMatch algorithm had a long run and proved fairly successful at predicting movies that subscribers would like. According to Netflix, these predictions were accurate within half a star 75 percent of the time, and half of Netflix users who rented CineMatch-recommended movies gave them a five-star rating.

Recognizing that there's always a better way to do something, Netflix launched a contest in 2006 to find an algorithm that could beat CineMatch. The contest, called the Netflix Prize, promised $1 million to the first person or team to meet the accuracy goals for recommending movies based on users' personal preferences. Netflix also released the test data for algorithm developers to follow: 100 million movie ratings, ranging from one to five stars, from anonymous users. Three years later, the $1 million prize was awarded to BellKor's Pragmatic Chaos, a seven-member team which included two AT&T researchers. BellKor's Pragmatic Chaos submitted its winning algorithm only 24 minutes before another team, The Ensemble. Each of these algorithm submissions demonstrated 10 percent improvement over CineMatch [sources: Netflix, Hoffman].

The recommendations system updates itself constantly, making thousands of recommendations every second based on more than 5 billion movie ratings. Netflix reports that the average Netflex user has rated about 200 movies, and new ratings come in at about 4 million per day. About 60 percent of Netflix subscribers select movies based on these recommendations. You can find these in the "Suggestions for You" section on the site, and you can refresh the suggestions as you rate more movies [source: Netflix].

Making good movie recommendations may seem like something that would require instinct or emotion. For example, if you recommend a movie you've seen to a friend, you take into account how the movie made you feel, your tastes and your friend's tastes. Netflix recommendations, on the other hand, are all math. Netflix matches your viewing and rating history with people who have similar histories. It uses those similar profiles to predict which movies you are likely to enjoy. That's what these recommendations really are -- predictions of which movies you will like.

These predictions rely on algorithms and statistics. It starts by matching movies to each other rather than matching people to movies, since there are far fewer titles in the library than there are Netflix subscribers. To make matches, a computer:

Often, these predictions make logical sense. A Netflix customer who gives two movies in the "Lord of the Rings" trilogy five stars is likely to enjoy the third film as well. However, Netflix users who spend a lot of time rating their movies and looking at their recommendations may find some surprising correlations. This is because the algorithms that keep the recommendation system running don't necessarily have anything to do with the plot or cast. Instead, they have to do with other subscribers' rental and ratings histories.

According to one article in the "New York Times," this recommendation system has significantly changed people's movie preferences. It has given independent releases and films that did not succeed at the box office a wider distribution [source: New York Times]. As more Netflix subscribers see and rate these lesser-known films, the system recommends them to more people.

Regardless of whether someone is renting a classic movie, an independent film or a new release, the Netflix distribution system handles it in the same way. We'll look at how movies get to your home and back to Netflix in the next section.

The Next Big Netflix Prize?

When it announced the winners of its first Netflix Prize competition, Netflix decided to launch a second round to take on a more difficult task. Rather than predicting what users are interested in based solely on ratings, the new challenge was to add in demographics and rental behavior. This means your recommendation could take into account your age, gender, ZIP code and the fact that your last 20 rentals were all Japanese anime. However, when Netflix released customer information to start this second round, the Federal Trade Commission (FTC) stepped in with a lawsuit. As part of the March 2010 settlement for that suit, Netflix cancelled this second round [sources: Hoffman, Hunt].