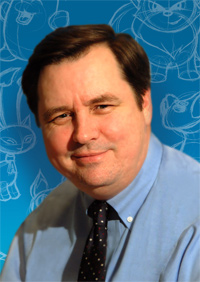 Neopets CEO Doug Dohring has strong ties to the Church of Scientology. He is listed on Scientology's Hubbard College of Administration Web site as someone who uses the "Administrative Technology" created by L. Ron Hubbard, founder of Scientology. He has also received awards for donating more than $250,000 to Scientology-related groups and causes [ref]. On one Scientology site, Dohring declares, "Having used his [Hubbard's] technology in every business activity for nearly two decades now, Mr. Hubbard's organizational concepts are always with me to the point where virtually every aspect of running my companies involves the use of his administrative technology" [ref]. Dohring also confirmed the use of Scientology principles in an interview with Wired magazine, saying of Hubbard, "He created a management technology that's very powerful."

What exactly are these administrative principles? Hubbard's Administrative Technology is based on the Org Board, short for organizing board. This system creates seven divisions within a company: executive, personnel, sales, finance, training, marketing and qualifications, with three subdivisions within each division [ref, ref]. The Church of Scientology Web site states that Hubbard developed this system in 1965. However, Hubbard described the Org Board in a 1965 lecture as a system that had been in use by a galactic civilization for 80 trillion years in the past -- his system is an improvement upon this existing system [ref].

While no one has claimed that any aspects of Scientology exist on the Neopets Web site itself, there are unsubstantiated rumors that employees are encouraged to convert to Scientology.

Despite the criticisms and controversies, the Neopets empire shows no signs of slowing down. As of February 2006, Neopets claims over 100 million users and over 150 million individual pets [ref]. The company will soon make the jump to another lucrative market -- cell phone ring tones and wallpapers [ref].

For more information about Neopets.com, check out the links below.