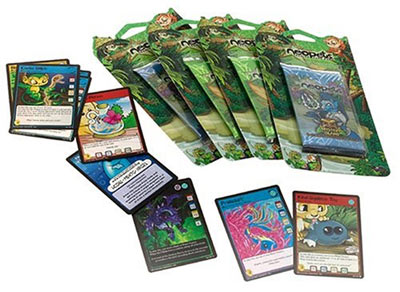 Neopets boasts that it is one of the "stickiest" sites on the Internet, with users spending an average of six hours and 42 minutes at the site per month [ref]. How does Neopets generate such loyalty in its users? There are many ways for Web sites to generate stickiness, and Neopets does several of them very well.

Neopets has licensed their characters and name to several different manufacturers to bring products to Neopets fans around the world. Wizards of the Coast, makers of "Dungeons & Dragons" and the "Magic: The Gathering" card game produces the Neopets Collectible Card Game (CCG). Each pack contains several cards from the set, some more rare than others. Players build their own decks out the cards they have, so each player has a different deck. The object of the game is to defeat your opponent's Neopets in arena battles using items and weapons. Each pack of cards also contains a code that can be entered at the Neopets site to receive special items.

Perhaps the biggest project in the works for Neopets is the Neopets movie. Slated for a 2006 release, the movie will be a computer-animated feature directed by John A. Davis (director of "Jimmy Neutron: Boy Genius"). Neopets currently has a multi-picture deal with Warner Bros. Studios, so more Neopets movies on on the way.

Next, we'll find out who owns Neopets, how they make money and how the site was created.

While Neopets will remain free for the near future, the company is in the process of rolling out a premium service. For $7.99 per month, users will be able to enjoy special message boards, a Neopets portal (a customizable Neopets homepage, sort of like My Yahoo), an ad-free site, a Neopets Web mail address, a better version of the Marketplace shop search function, and advantages when it comes to earning Neopoints or finding rare items.