Making International Calls from a Landline 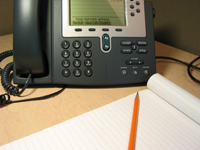 Just like the United States, most other countries' telephone systems are broken up into many different area codes or city codes. The area code for Sao Paulo, Brazil, is 11 and the area code for Cape Town, South Africa, is 21.

Last comes the local number, which can run from as few as five digits to as many as eight. Local numbers in the United States have seven numbers, while the Kyrgyz Republic only assigns five.

Here are some hypothetical examples of international phone calls and their corresponding numbers:

Most major U.S. long-distance carriers offer special calling plans designed around your calling habits. If you call Mexico twice a week, but hardly ever make national long-distance calls, you can usually negotiate a special flat rate with the long-distance company that will be much cheaper than the basic per-minute international rates [source: Federal Communications Commission].

Yet another option is to use a dial-around international calling service. Those are the numbers that start with "10-10-123" or some variation. By dialing these numbers, you bypass your local long-distance carrier and access a phone network with better international rates. These aren't prepaid services like a calling card, so you'll be billed on your regular phone statement [source: Federal Communications Commission].

We'll talk about another option, callback services, later in the article. For now, let's explain how to make an international call using a VoIP service.