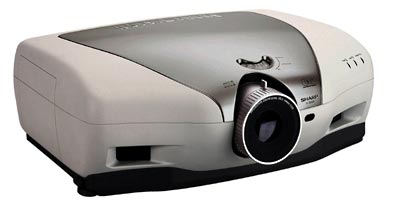 The main advantage of a front-projection television is very large screen size. Since the components don't have to be packaged together, screen size is limited mainly by the room space -- what size screen you can fit in the theater, and how much distance you can put between the projector and the screen. Screens as wide as 200 inches are not uncommon. Projectors do vary in capacity -- make sure the projector is powerful enough to project a bright image across the room.

Most projectors work properly only in a darkened room. Consequently, they are really only suitable for a separate home theater space, rather than a family room or ordinary den. Since they are designed for watching movies, front projectors don't usually have a built-in television tuner: They don't receive television signals themselves, so they must be hooked up to a separate tuner (such as the tuner in a DVD player).

Front-projection systems use the same types of technology as rear-projection TVs -- CRT, DLP, LCD and LCoS. CRT systems can require professional installation, wiring and calibration. Other projector types can be easier to install, but they can also carry a pretty hefty price tag.