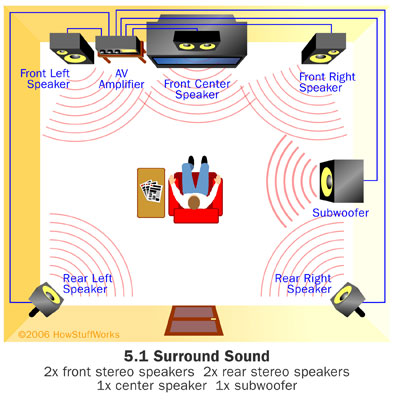 Between the two companies, there is a dizzying array of sound options. So here's what you need to know:

Fortunately, a lot of a/v receivers support a wide range of Dolby and DTS options. When you're choosing a receiver, you should decide two things: whether you want DTS support and how many speakers you want to use for your surround-sound setup. The most common options are 5.1, 6.1 and 7.1 surround, named for the number of channels. The ".1" indicates a channel for a subwoofer. The subwoofer channel carries low-frequency sound to give a bass boost and create a rumbling effect for certain special effects sounds, such as explosions and trains. These are the typical speaker setups and formats that will support them:

The sound system is what really makes a home theater experience complete, but the first thing you'll probably notice when you sit down in front of a theater setup is the television. In the next few sections, we'll see how televisions fit into the home theater.

If you're really on a budget, you can rig your own surround-sound setup with four speakers and a regular stereo signal. See Accessing the Surround Channel for more information.