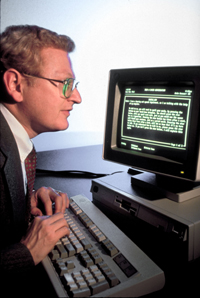 Technology lets people with hearing problems make phone calls over their computer like in this early IBM version.
© Somos/Veer/Getty Images

TTY technology gives the deaf and hard of hearing a text-based system for communicating over phone lines among themselves or with hearing individuals. Starting in the 1960s, hearing -impaired telephones that used this technology made the deaf and hearing impaired less isolated. Whether you call them TTYs, TDDs, textphones or minicoms, these devices now have four million U.S. users.

Here's how TTY works. The TTY unit itself resembles a laptop computer with a keyboard, a display screen and a modem. The user types his message, and the letters are converted into electrical signals that travel over the phone line. When the message reaches its destination, the signals are converted back into letters that appear on the receiving TTY unit's display screen or are printed out. A flashing light on the unit or a vibrating wristband alerts the recipient that a message has arrived. Some units also have answering machines [source: Brainerd.com].

TTY owes its existence to a deaf scientist named Robert Weitbrecht. He developed an acoustic coupler in 1964 that allowed a TTY unit to be connected to a telephone. Early TTY units were large and cumbersome. By 1967, only 25 TTY stations were available, but by 1969 that number had increased to 600.

But changing technology has begun to threaten the existence of TTYs. E-mail, text messaging, instant messaging, e-paging and electronic faxing can be done from a computer with Internet access -- and without TTY. Add a Web camera and voice over Internet (VoIP) technology, and two deaf people can even sign to each other in real time.

With the arrival of BlackBerry mobile devices, iPhones and other smartphones, texting and IMing can be done almost anywhere. Picture phones with video allow signed messages to be recorded and sent, and vibrating phones make it easy for a deaf person to know when a message has arrived.

Is there still a place for TTY? Definitely among people who have used it for years and are more comfortable with it than with newer computer and mobile technology. And an argument can be made for keeping a simple TTY unit at home for emergencies. Like corded landline phones, TTYs rely on the telecommunications grid, rather than electricity, for power. So if electrical power is out in your area, you can still send and receive messages with your TTY unit.

Finding a TTY unit is easy. If you use a search engine like Google for the acronym "TTY," you'll see companies that sell these units for $250 to $600. Gallaudet University, which provides higher education for the deaf and hard of hearing, also provides a list of vendors of TTY unit, modem and software manufacturers.

With just TTY units and the phone system, people who are hard of hearing can communicate with each other. But using TTY to communicate with hearing individuals requires the use of the free Telecommunications Relay Service or related telephone relay services. Find out more on the next page.