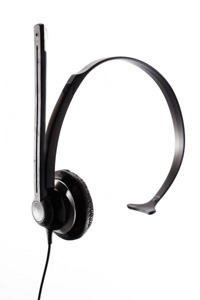 People with hearing loss can get a special phone or a headset to help them hear on the phone.
© Thomas Northcut/Getty Images

If you've set the volume on your phone as high as it'll go and voices still sound faint, you may want to consider a device for hearing-impaired telephones called a phone amplifier. Several options are available, including units that attach to a phone line, portable amplifier units and dedicated amplifier telephones, as well as cell phone amplifier systems.

Here's how each of these phone amplifiers works.

Phone line units -- An amplifier like this connects between a phone's handset and base to increase volume. For example, the Ameriphone in-line phone amplifier, which costs about $35, can amplify sound by up to 40 decibels. Like other similar units, it also blocks out feedback and background noise and amplifies specific frequencies to make speech clear and similar-sounding words easy to distinguish. These units usually are small enough to be portable [source: ActiveForever.com].

Portable amplifier units -- These small devices are handy because you can take them with you to use on almost any landline phone. They are inexpensive ($20 to $30) and easy to attach to the headset without disconnecting and reconnecting phone lines. By turning a dial on the Reizen Portable Phone Amplifier, for example, you can increase volume by up to 30 decibels [source: Harris Communications].

Dedicated amplifier telephones -- Amplifier telephones with added features are available for corded or cordless landline phones. These phones allow you to increase volume by adjusting an amplification dial or button on the phone and, in some cases, also adding volume with a handset boost button.

The ClearSounds CSC50 amplified corded phone, for example, allows an increase of 50 decibels with 40 coming from the phone's amplification system and another 10 decibels from the handset. The $160 phone also offers caller ID and a speakerphone [source: Beltone].

Amplified cordless phones cost more, usually $180 to $280. At the low end, a Clarity amplified 2.4 GHz (gigahertz) cordless phone that costs $180 can amplify sound up to 30 decibels and comes with caller ID and a visual ringer. Additional handsets cost $100 each. A 5.8 GHz Clarity model that costs $280 amplifies sounds up to 50 decibels and adds multiband compression, noise reduction and acoustic echo cancellation [source: IndependentLiving.com].

Another option to consider with a corded phone is an amplified handset that simply replaces the one that came with the phone. Ranging in price from about $50 to $150, amplified headsets like the Walker W60-K-M-00 may be less expensive than replacing the phone [source: HeadsetZone.com].

But perhaps you're looking for a cell phone solution. One of the problems in developing cell phones for the hard of hearing has been that the radio frequency signal from cell phones can interfere with hearing aids, causing buzzing or other noise. However, hearing aids often come with a telephone coil, or T-switch, that acts like an antenna. When the switch is on, the magnetic signals pass from the phone to the hearing aid, allowing the user to receive the phone communication directly through the hearing aid.

Since 2005, the Federal Communications Commission (FCC) has required cell-phone companies to provide several models that are hearing aid compatible when used with the hearing aid on the microphone setting. The FCC also requires that cell phones be rated on a scale of 1 to 4 for the amount of interference they're likely to cause with hearing aids on M (microphone) and T (telephone coil) settings. Phones that are rated M3 or T3 (good) or M4 or T4 (excellent) can be sold as hearing aid compatible. Check for an icon on the phone or its packaging that show its M and T ratings [source: HearingLossHelp.com].

If amplification isn't enough, you may want to consider a TDD, TTY, text phone or minicom. Go to the next page to find out how TDDs work.