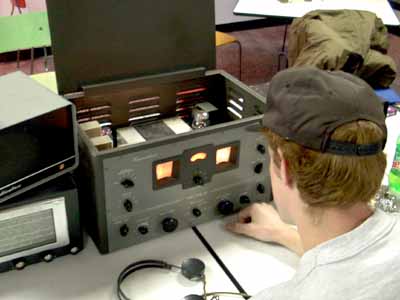 A typical ham radio is a transmitter and a receiver, usually purchased as one unit, called a transceiver. Newer transceiver models often have semi-complicated controls and menu systems that may take some reading of the manual. You may be able to find an older transceiver with controls that are easier to use as a beginner, having the usual analog controls.

Hand-held transceivers have their own antennas. Many hams choose to do most of their operating from their automobile during commute times, using a magnetic mount antenna connected to an under-dash transceiver or a hand-held radio.

Depending on the size (hand-held or desktop), power can be from a few milliwatts to 1,500 watts. Many new hams are graduates from citizens band (CB) radio. Unlike the 5-watt limit on CB, hams can use quite a bit more power (1,500 watts).

The ham radio can fit in your shirt pocket, take up half of an attic or garage, sit on a desk next to the computer or go into a car. Right now, during the current sunspot cycle, it is possible to talk around the world during daylight hours running just a few watts of power. This particular type of radio-wave propagation is in the 28-MHz band (commonly called the 10-meter band) thanks to short-wave propagation (300 divided by the frequency in MHz is a quick way to convert to "meters").