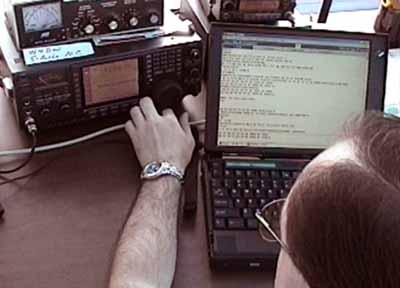 Although a ham radio does broadcast in all directions, hams generally do not use their radios in a broadcast kind of way as a disk jockey would at a radio station. In normal AM or FM radio, one disk jockey transmits and thousands of people listen. Hams, on the other hand, conduct two-way conversations, often with another ham or with a group of hams in an informal roundtable. The roundtable of hams may be in the same town, county, state, country or continent or may consist of a mix of countries, depending on the frequency and the time of the day. Hams also participate in networks, often called nets, at predetermined times and frequencies to exchange third-party messages. In the case of disasters, hams exchange health and welfare information with other hams. Some hams use radioteletype, (RTTY) with computer screens replacing the noisy teletype machines of the past.

Many hams get their start on VHF FM, using battery-operated hand-held transceivers set to transmit on one frequency and receive on another frequency. They use FM repeaters, set up and supported by local radio clubs. These repeaters borrow antenna space from TV-station-tower owners on top of mountains and high buildings to receive and re-broadcast signals to extend the range.

The FM repeater receives one signal at a time and simultaneously rebroadcasts it on another frequency using many more watts of power than available from a small hand-held radio. This extends the range of the hand-held radio from a few miles to tens or hundreds of miles! The whole country has these repeaters! (Listen to one with a radio scanner to learn a lot about ham radio.) When a ham is traveling, he or she can find a repeater to use (great for tips on local restaurants), and carry on a nice, static-free, FM-radio-quality conversation via a radio that fits in the shirt pocket or purse. Linked repeaters allow fun wireless communications across an entire state with a hand-held radio.

Repeaters use common transmit and receive frequency pairs. The frequency pairs in use are informally assigned by groups of hams so that any frequency pair in use is far enough from another repeater so as not to cause unwanted interference.

Natural disasters like hurricanes or tornadoes disrupt normal telephone and cell phone systems. Ham radio operators pitch in to help with emergency communications, and you will often hear about them on news reports.

On Space Shuttle missions, each member of the crew usually has an amateur radio operator's license. During breaks, astronauts hold their 1- to 5-watt VHF FM hand-held radios up to the shuttle window and chat with other hams for a few minutes, often at schools while the shuttle is in an orbit overhead! VHF transmissions have a limit to line-of-sight communications and normally do not travel over the horizon, so a conversation is limited to the time when the shuttle is overhead. The space station MIR used 145.985 MHz for similar conversations. Future ham radio efforts in space will focus on the use of amateur radio within the International Space Station (ARISS) project.