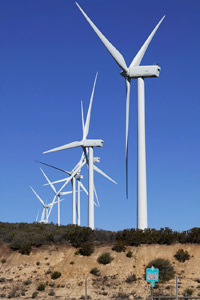 Most people can't afford to own a traditional wind turbine -- they're huge.
Robert Nickelsberg/Getty Images

At the 2007 Glastonbury Festival of arts in Somerset, England, patrons arrived to find a strange contraption on the fairgrounds: a large, bright orange tent topped by a working wind turbine. It could have been a piece of modern art. Instead, it was a cell-phone charging station. People could plug right into the turbine's power unit and recharge.

Wind power is one of the fastest-growing segments of the green power industry, with worldwide capacity increasing by nearly 30 percent from 2007 to 2008 [source: AWEA]. This power capacity is mostly in the form of huge wind farms, though. Most people can't afford to own a wind turbine, which can run thousands of dollars for a residential setup. But a recent innovation in the technology has made it much more accessible to the average consumer: You can now use a shrunken, plastic windmill to recharge your cell phone. It's not as fast as a plugging in to a wall outlet, but the idea behind the wind-turbine charger is that you don't always have access to a traditional outlet. Now, when you venture away from civilization, you can still make use of a cell phone. If you run out of juice, you can create more by harnessing the wind.

­These wind-power chargers are still quite new. In this article, we'll take a look at the two primary ones out there. One is still in prototype stage -- that's the Orange Wind Charger announced at Glastonbury. It's a straightforward wind-turbine design that generates electricity to power a mobile gadget. The device that's already on the market is called the HYmini, and it offers a wider variety of power-source options, one of which is wind.

Let's begin with a look inside a wind-powered phone charger. As it turns out, it's a whole lot like a 60-foot (18-meter) wind turbine, only it fits in a backpack. 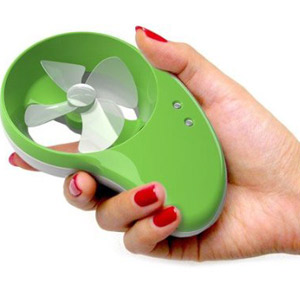 Since a cell phone runs on electrical energy (in the form of a battery), a wind turbine can power it just like a wall outlet can. In both the Orange Wind Charger and the HYmini, the components are just like those of a full-blown wind tower, but they're made of lightweight plastic instead of steel and fiberglass. The blades are measured in inches instead of feet. And instead of sending its electricity to the power grid, it sends it to your cell-phone battery.

The HYmini and the Orange accomplish this task in slightly different ways, although the overall concept is the same. Each powers up a mobile device -- cell phone, MP3 player, digital camera, you name it -- using clean energy and without access to the power grid. In the Orange, that energy is all wind.

At just over 5 ounces (150 grams), the Orange charger is ideally suited to camping. It's made to fit in a backpack and then mount on top of a tent to capture wind. The turbine directly charges a battery located in the detachable control box, and then the battery charges your cell phone with a 0.5-watt output.

The HYmini is a smaller, one-piece unit that generates more power than the Orange -- up to 1.7 watts. This is because the HYmini doesn't rely entirely on wind power. In fact, wind is just an ancillary power source. The primary ones are a wall outlet, which charges up the HYmini before you go on your trip, and solar panel add-ons that you can attach when you're not speeding along on your bike. 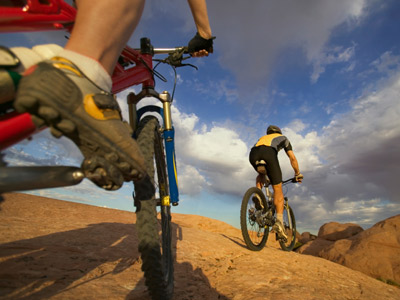 If you own a HYmini, you can attach it to your arm or bike to take advantage of speed.
iStockphoto.com/Sportstock

The first thing you do when you get a HYmini is plug it in.

It takes about 4 hours to fully charge the HYmini battery using a wall outlet. The battery charges your cell phone, MP3 player or digital camera via the built-in USB port (or an adapter connected to the USB port). Once that full charge from the wall outlet is used up, that's when you go green.

The design of the HYmini is sporty, with a propeller just a few inches across and attachments to secure the unit either to your arm or to your bike. Wind is intended only as a top-off -- you can hold the unit in the wind or create your own wind on a bike or skis. The turbine generates up to 1 watt of power in 9 mph to 40 mph winds (15-64 kph); above 40 mph, it cuts off so the blades don't spin too fast. If your cell phone dies, find yourself 20 minutes of 19 mph (30 kph) winds and you'll get yourself another four minutes of talk time -- more than enough to call a friend to come pick you up after a wreck. Or, you could use those 20 minutes to power up 40 minutes of music or 20 digital photos.

For another 0.7 watts of power, you can attach up to four mini solar panels and hold the unit in direct sunlight.

The Orange Wind Charger is intended for camping-type applications, not high-speed ones. The 12-inch (30-centimeter) propeller separates from the tower for packing, and you reassemble the unit upon setting up camp, usually atop a tent where the blades will have good wind exposure. Once the turbine fully charges the control-box battery, you can unplug the box and take it anywhere to charge your phone on the go.

With the Orange's half-watt power output, with the blades spinning in steady 12-mph (19-kph) winds, it takes up to 2 hours accumulate a full charge for a phone [source: GotWind].

Which brings us to the drawback of the wind-powered charger: Sometimes, there's no wind. This is more of an issue for the Orange turbine, which is intended to stand in place and catch environmental winds. For the HYmini, with its solar add-ons, generating power can be more of a sure thing -- in daytime on a cloudless day, at least.

Still, in an emergency, a wind-power charger is probably better than no charger at all. And at about $50 for the HYmini (no word yet on how much the Orange will cost if it hits the market), it could be worth it to bring one along and hope for a little help from nature.

For more information on wind-turbine chargers and related topics, look over the links on the next page.