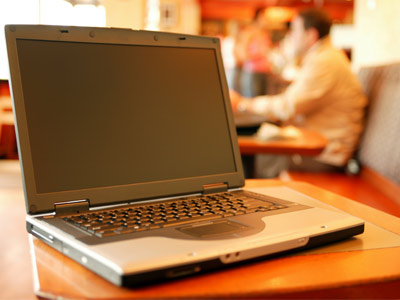 No strings, no connections: wireless hotspots are great for doing work away from the home or office. The only trouble is finding where they are. See more pictures of laptops.
©iStockPhoto/JSP007

Hotspot: This trendy term has taken the Internet-addicted population by storm. If you're not very tech-savvy and aren't familiar with it, take a look when you stroll by cafes and restaurants or the next time you go to the airport. You'll probably see signs letting people know that the location is a WiFi hotspot. You'll also probably notice several preoccupied people with noses buried in their laptops. A WiFi hotspot is simply a place where you can access wireless Internet. In the past few years, WiFi access has seeped into more and more places and facilities.

WiFi access has become so prevalent that it's turned many people into laptop-toting, Internet hunters on the prowl for a signal everywhere they travel. When they reach a place that fits the typical characteristics -- sells books or coffee and has tables or comfy chairs -- they can pretty safely expect to find a WiFi signal. But now that many buildings, college campuses and other kinds of facilities are adopting WiFi, the hunt for a signal is getting more interesting.

­Unlike coffee shops that want to attract more customers, other facilities may not make it very obvious if they have a WiFi signal. In this way, the search has become more challenging. There's nothing more frustrating than taking o­ut and booting up your laptop only to find that there's no signal. You'll have to pack up all your stuff, move on and try again. Some poor souls desperate for a signal will wander aimlessly with their laptops open waiting for a sign of wireless life.

After all this rigmarole, you've wasted time, patience and precious laptop battery power. Fortunately, however, there's an alternative. Certain devices have emerged that will help relieve the wandering wireless syndrome: WiFi detectors. Next, we'll explore the technology behind these useful travel gadgets. 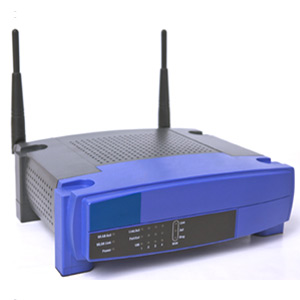 This wireless router emits a signal that a WiFi detector is tuned to pick up.
©iStockPhoto/sambrogio

A wireless signal can travel only so far. Specifically, a typic­al signal can extend as far as 1,000 feet (304.8 meters) in an unobstructed, open area and about 300 feet (91.44 meters) in a closed area that has obstructions [source: Graves]. Because the signals themselves are invisible and the access points (routers) that emit them are usually hidden, a WiFi detector can be a handy tool. WiFi detectors are basically just gadgets that can quickly and easily tell you whether you're around a WiFi signal.

In order to standardize the wireless Internet process, a group called the Institute of Electrical and Electronics Engineers (IEEE) has specified 802.11 as the group of networking standards it uses. Such standards specify how data travels through the waves. Different letter-signifiers further specify the set of standards. Some common ones are 802.11b and 802.11g, both of which use the 2.4-GHz band. Within the 2.4-GHz band, you have specific channels. In the United States, wireless Internet has 11 available channels on the 2.4-GHz band (other countries may have fewer or as many as 14).

The detector's job is to pick up on the waves with frequencies meant for transmitting wireless Internet. To accomplish this task, the antenna must be designed to receive the right kind of signals. Much like the antenna on your car radio is tuned to pick up on a specific range of frequencies (and not, say, frequencies that carry police communications), the antenna on a WiFi detector is tuned to pick up only on the specific band that carries wireless Internet. If you examine the specifics of detectors, many will list that they're meant for picking up 802.11b and 802.11g networks.

Antennas alone, however, wouldn't make very useful travel gadgets. A detector must have some sort of interface for alerting you when it does pick up on the right signals. Many will also gauge just how strong the signal is and convey that to you. In addition, many modern WiFi detectors also come with processers that allow them to demodulate (or process) the data to give you some valuable information before you decide to set up camp with your laptop.

The name "WiFi" doesn't really stand for anything. Rather, it's a play on the term "hi-fi," which stands for high fidelity, an audio term for music recordings that faithfully recreate the sound of original performances. 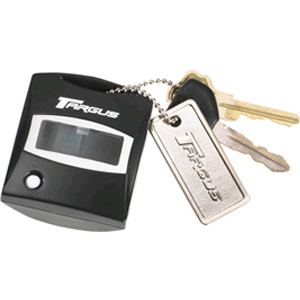 Some WiFi detectors are small and light enough to use on a keychain.
Image courtesy Targus

As we mentioned, all WiFi detectors have interfaces that somehow inform you if a wireless signal is present. Apart from this basic function, however, all detectors are different. Manufacturers have come up with many methods for conveying the information to the user, and some of these gadgets are able to provide more information than others.

Many use LED lights, for instance. These typically light up in a scale fashion, where a single light indicates a weak signal, and more light up in sequence as the signal gets stronger. More advanced detectors use an LCD screen to display some useful information. Not only will it tell you the degree of signal strength, but perhaps also the SSID (Service Set Identifier), which is basically the name of the network. This would alert you to whether the wireless signal it's picking up is coming from your own home network or the neighbor's.

Detectors might also list the operating channel on which the network is working. This is helpful for reducing interference. It turns out that multiple networks working within the same proximity in the 2.4-GHz band can cause interference for each other. If you remember from the previous page, the 2.4-GHz band has 11 available channels in the United States. Interference can be reduced by spreading WiFi networks farther apart across the channel numbers. Thus, if your detector informs you that your neighbor's network is using channel 6, tune your router to channel 1 or 11.

When using WiFi detectors, remember that they run on batteries (usually AAA), so don't leave them on when you're not using them. Many include an indicator of battery that lets you know if it's in need of a replacement soon. Some actually have different settings that allow you to control the battery consumption or let you plug into your computer's USB port to charge [source: Dickey].

­Another helpful feature is that some detectors can tell you if the signal is encrypted (secured). If it's encrypted, you'll need a password to use it. Unfortunately, some people who travel around looking for unencrypted wireless signals might use this feature against you. When you leave your network unencrypted, freeloaders might snoop into your Internet activities or perform illegal downloads (such as music sharing). Authorities looking for the perpetrators could trace these downloads to your network, and you could get wrapped up in legal frustrations even if they can't ultimately pin the fault on you. So, it's important to keep your wireless network secure and encrypted with password protection.

Overall, when you travel with a laptop, a WiFi detector can be one of the handiest travel gadgets to bring with you. You can even get a small keychain version to ensure you never leave home without it.

One of the most interesting applications for this Internet-hunting technology has to be the WiFi-detecting T-shirt. This shirt has light-up features that depict the strength of nearby 802.11b and 802.11g networks [source: ThinkGeek].