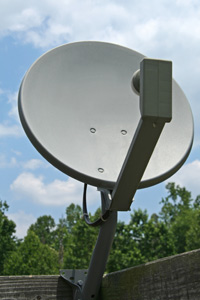 Through no fault of the receiver, using satellite Internet can get frustrating.
©iStockPhoto/pixelbrat

Basically, this is a simple task: Two coaxial cables run between the dish and the receiver, and an Ethernet or USB cable runs between the receiver and the computer. If you wish to go wireless, you can also connect Internet receivers to WiFi routers.

Perhaps the most frustrating part of working with this type of Internet access doesn't have to do with the satellite Internet receivers per se. The service itself isn't the fastest kind of Internet connection, nor is it the most reliable. Although satellite Internet might not be as fast as DSL or cable, it's typically faster than dial-up -- that is, when it's working.

Satellite Internet connections experience latency, or delay. Latency can have a variety of causes, and they aren't typically ones you can fix by replacing a few gadgets. One is distance, which is obviously a factor for satellite communications (even if the messages are traveling at the speed of light). The signals must travel the distance between the hub site and the satellite, and then to you, totaling about 46,000 miles (74,030 kilometers) in all [source: VSAT Systems]. This is why providers of the service will discourage you from playing certain games online that require quick response. However, providers do maintain that the connection supports streaming video.

Another factor in delay or disruption of service has to do with weather. Much like satellite TV, satellite Internet may not work well in bad weather, such as heavy rains. You'll have more trouble if there are any obstructions between the dish and satellite. One thing to look out for are nearby trees; anticipate trees growing a few inches taller over the lifetime of the satellite or sprouting leaves in the spring, both factors that will obstruct your connection.

In light of this knowledge and the prospect that satellite Internet can be more expensive than all the other options, you may wonder why anyone would get this service [source: Briere]. Don't underestimate the feature that sets it apart from competitors -- accessibility. Those who travel in RVs or in boats and those who live in the most remote areas certainly appreciate it when there's no other Internet connection to be had.

For related articles, including more interesting travel gadgets, browse the topics below.