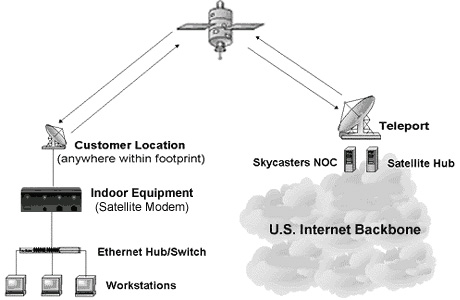 The receiver (modem) is a pivotal piece in the satellite Internet process.
Image courtesy Skycasters

Most Internet connections rely on terrestrial communications. Even when you take your laptop to a coffee shop and use wireless, the weak signals aren't strong enough to extend the access out of a very limited range (perhaps a few hundred feet), let alone out of the Earth's atmosphere.

For satellite Internet, signals are stronger and able to carry all the necessary data from the provider hub up to the satellite and back down (in a downlink) to your computer. With only downlink capability, you need a way (such as dial-up connection) to send back any information, such as a request for a Web page. This isn't helpful for those who travel and have no access to telephone lines. However, two-way satellite Internet allows you to send Internet signals back up (in an uplink).

Satellites are able to send and receive messages through space using waves of the electromagnetic spectrum. Specifically, the waves necessary to carry two-way satellite Internet signals strong enough for broadband Internet fall under the 27.5 to 30.0 GHz ranges for uplinks and 17.7 to 20.2 GHz for downlinks [source: StarLan]. The dish that receives the signals must have a clear view toward the direction of the satellites, which are located over the equator. That means that in the United States, your dish would need an unobstructed path to the southern sky.

While these analog wave signals make the transfer of data through air and space possible, computers only understand digital language (combinations of 1s and 0s). In order to get computers communicating with each other, there needs to be a translator. This is where satellite Internet receivers come in. They're really just modems. The word "modem" is short for modulator-demodulator, and these gadgets basically translate analog signals into digital data and vice versa.

For a downlink in satellite Internet, the dish would get analog information from the satellite and send it along to the receiver, which converts it to digital data (bit streams) before sending it to the computer. During an uplink, the process is reversed. You may have two modems to accomplish this task -- one for an uplink and one for a downlink -- but many receiver gadgets can do both jobs.

The receiver connects to the satellite dish through coaxial cables. Otherwise, the mechanics of satellite Internet receivers are similar to that of other modems. For example, they convert analog to digital data and can connect to your computer through either Ethernet or USB port connections [source: Kota].

As handy as these receivers can be as travel gadgets, there are some problems with them.