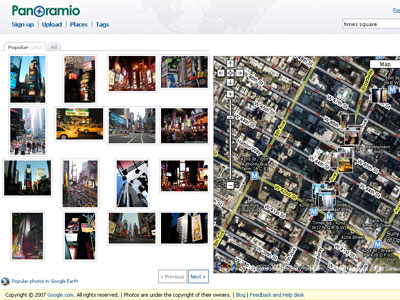 ­One of the easiest ways to automatically tag your photos with GPS data is to buy a camera with a built-in GPS receiver. On the high end of the spectrum is a camera like the Ricoh 500SE, which is designed for GIS professionals. In addition to having a built-in GPS chip, this camera has the option of connecting via Bluetooth to a handheld GPS receiver for even more accurate readings. Every time you take a picture, the GPS data is written to the photo's EXIF header.

For amateur photographers, there are more and more compact, point-and-shoot digital cameras that have built-in GPS chips. There are even cell phones, like the Nokia N78, that have both a built-in camera and a GPS chip.

If you're looking for a GPS photo tagging solution that works with all digital cameras, then consider a small GPS tracker. Basically, you turn on the device, put it in your pocket and take pictures all day. Before you upload the pictures to your computer, take out the camera's memory card and insert it in the GPS tracker. All of the GPS data is automatically written to each photo's EXIF header. Now you can upload as usual.

Another interesting gadget is the Eye-Fi Explorer, an SD memory card with a small WiFi radio transceiver. Though it doesn't receive signals from satellites like a normal GPS unit, the Eye-Fi Explorer talks to WiFi base stations that give it geographic information. This may be a solution if you're taking photos in a city, but won't work well out in rural or remote areas. Also, it's not as accurate as a GPS receiver would be [source: Gross].

There are a growing number of Web sites for viewing your geotagged photos on a map and sharing them with friends. Flickr is one of the most popular photo sharing sites for mapping photos. Even if your photos haven't been tagged with GPS data, Flickr lets you drag and drop your photos on a map to tag them with longitude and latitude coordinates. Keep in mind, however, that you have to do this manually. Flickr isn't using the information from the images' EXIF header.

If you want to upload previously geotagged photos to Flickr, you have to go to your account settings and switch the "Import EXIF location data" tab to "yes." Flickr sets the default answer to "no" to protect its users' privacy. Now Flickr will automatically load all of your GPS-tagged photos on its map view. You can also create smaller maps to share with friends.

Two other photo Web sites, Picasa and Panoramio -- both owned by Google -- not only allow you to upload photos and create interactive photo maps, but they let you view and share photos using Google Earth. Google Earth is a free software application that allows you to zoom in and search 3-D satellite images on a virtual globe.

Picasa and Panoramio both give you the option of creating a .kml file from your uploaded photos or entire albums. If you imagine Google Earth as a kind of Web browser, then .kml files are like HTML files [source: Google Earth User Guide]. Google Earth reads a .kml file and displays your photos in their exact geographic location on its virtual planetary surface. Even better, you can share your .kml files with friends.

For lots more information about digital cameras and travel gadgets, follow the links below.