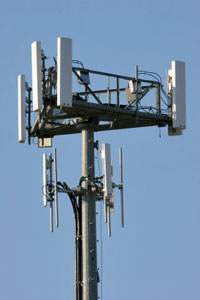 If your cell phone isn't compatible with the frequencies coming from this tower, it doesn't matter what SIM card you're using.
© iStockphoto/jane

As you know from reading How Cell Phones Work, cell phones communicate via radio signals. Since the radio spectrum is a crowded place, cell phones are assigned certain frequencies at which they can broadcast.

Unfortunately, different countries assign different frequencies to their cellular networks. So before you decide to travel with your cell phone, you need to make sure that it will even work in your destination country.

For GSM phones, there are four main international frequencies:

When you go to buy a cell phone, pay attention to which frequencies or bands it supports. Most GSM cell phones are dual-band phones that only work on the two most common frequencies for that country. But if you plan on traveling overseas, you'll want to invest in a tri-band or quad-band phone that is able to communicate over three or four different frequencies.

As cell phones become even more popular and more robust, cellular providers have begun to purchase more frequencies to support 3G and even 4G cell phone service. In some parts of Europe, cellular carriers are already using the 2,100MHz frequency for 3G networks. And in the United States, Verizon has purchased space on the 700MHz frequency to offer even faster Web browsing and data transfer speeds using a new 4G technology called Long Term Evolution (LTE) protocol [source: Reardon].

Every GSM phone is loaded with a SIM card. The SIM card holds your phone number, contact list and other account settings. SIM cards can be swapped in and out of any unlocked GSM phone. So if you travel, you can buy a local SIM card with a local phone number and use it with your GSM phone.

A new SIM card, however, won't change the frequency coverage of your phone. You still need to have a phone that communicates over the right frequency for your destination country.

Now that we understand how GSM frequencies and SIM cards work, let's talk about some of your options when using a GSM phone abroad.