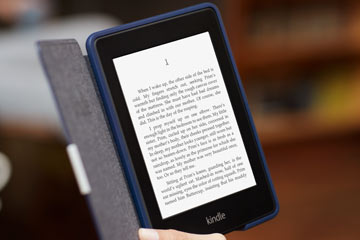 The most glaring difference between the new Kindle Paperwhite and its predecessors is a lit screen, though it still sports a gray scale E Ink display like previous Kindle e-readers. Rather than using backlighting like that of LCD screens, the Paperwhite uses lights set into the bevel at the bottom of the display to shine down onto the screen. A new Light Guide layer, a thin sheet of nano-imprinted flattened fiber optic cable, distributes the light uniformly over the entire screen, giving the illusion that it is backlit. But since the light is directed toward the screen and not toward your eyes, the Kindle Paperwhite retains the E Ink advantage of being easy on the eyes. Despite the addition of light, which is usually a big power drain, Paperwhite keeps battery usage at a minimum by using low-powered LEDs as the light source.

Underneath the Light Guide layer is a 2-point multi-touch capacitive touch-screen, a step up from the infrared (IR) touch-screens on the Kindle Touch and other competing e-readers. Below the touch-screen layer is the improved E Ink display. Compared to prior models, resolution went from 600 by 800 to 768 by 1024 pixels, and pixel density went from 167 PPI to 212 PPI. Paperwhite also has six specially designed fonts, up from three on the previous models.

Other new features include:

Amazon also revamped the user interface for the Paperwhite, moving from a mostly text menu-based design to a more image-based one that has you scrolling through book covers. And to increase the chances of you buying more books directly through the device, it showcases a row of Kindle Singles for potential purchase on the home page just below a row of books from your own library.

Another major selling point of the Kindle is the way it interfaces with Amazon's massive inventory of electronic books. We'll look into that more in the next section.