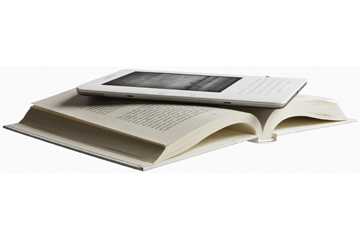 The Kindle's form factor makes it easy to use and to carry around with you.
Courtesy Amazon

One complaint some people had about early e-book readers was that they found it difficult to read words on an LCD display. Some users complained that longer reading sessions put too much strain on their eyes. Amazon's solution to this problem was to use electronic ink technology. The Kindle's electronic ink screen looks more like paper than an LCD screen. It reflects light in much the same way that paper does. The screen lacks a backlight, so, with the exception of the new Paperwhite, you'll need an external light source in order to read anything.

A company called E Ink in Cambridge, Mass., developed the technology the Kindle relies upon to display text and images. Rather than use the liquid crystals you'd find in an LCD or the ionized gas you'd find in a plasma display, electronic ink actually uses millions of microcapsules, only a few microns wide. Each microcapsule contains a clear fluid and thousands of white and black particles. The white particles carry a positive magnetic charge and the black particles have a negative charge.

Working together, thousands of electrodes and millions of microcapsules generate the text and images you can see on an electronic ink display. Through precise charges the Kindle can display a range of grays to provide shading in images. You can even adjust the Kindle's font settings to display text in a larger or smaller font size.

The Kindle uses less energy to generate a page view than a comparable LCD or plasma screen. The company's Web site states that the Kindle pulls power from its battery only during the initial page generation. It doesn't require more power until the user changes the page view. Because of this feature, the Kindle's battery can provide power for up to two months on a single charge (assuming the user doesn't have the wireless feature turned on).

The electronic ink display is one of the Amazon Kindle's top selling points. Read on to find out about screen and display changes in the newest Kindle, the Paperwhite.