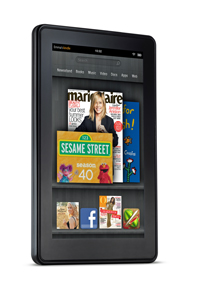 The Kindle Fire is a full-color tablet running a version of the Android operating system.
Courtesy Amazon

The 2011 redesign of the Kindle line was dramatic. Many of the controls found on the earlier models of the Kindle disappeared. The basic Kindle replaced the keyboard and page controls with four buttons and a five-way controller. Touch-screen Kindle Touch models with two buttons -- one to turn the device on or off and a home button that returns you to the main menu -- were also introduced. And in 2012, two new Kindle Paperwhite models were unveiled with only a power button and the touch-screen, replacing the Kindle Touch entirely.

The basic $69 Kindle doesn't support audio -- there's no speaker or headphone jack. To page through a book, you use the "previous page" and "next page" buttons. One of each is found on either side of the device. The top buttons page back, and the bottom buttons page forward so you can flip pages with either hand. The five-way controller can be used to move the cursor to text on the page for highlighting and selection purposes, to scroll through and select menu items or to skip from chapter to chapter or article to article in certain books and magazines. To type in notes or to browse blogs, you can pull up a virtual keyboard with the keyboard button and enter keystrokes using the five-way controller. If that seems cumbersome or time-consuming, you can opt for a Keyboard Kindle or get one of the Kindle Paperwhite models, which like the discontinued Touch devices have multi-touch touchscreens that allow you to type on the virtual keyboard, but unlike the Touch, do not support audio.

With the Kindle Paperwhite devices, all your navigation uses the touch-screen interface. Once in a book, tapping a thin strip on the leftmost edge of the screen pages back, and tapping anything to the right of that strip pages forward. You can also use swipe gestures to page forward or backward. Tapping the top of the screen brings up toolbar with six icons that allow you to go to the Home page, go back, adjust brightness, go to the Kindle store, search and bring up menu options, respectively. A virtual keyboard allows you to type notes and browse.

The Kindle Keyboard 3G is the only Kindle still available that supports audio. You can listen to audiobooks or MP3s on the Keyboard, or use the Text-to-Speech feature that reads materials to you aloud, as long as the copyright holder permits this. The Keyboard 3G device has rear-mounted speakers and a 3.5-millimeter audio jack.

Most Kindles come with a USB cable for charging or file transfer through your computer, and a power adapter for the USB cable for recharging through a wall power outlet. However, the new Paperwhite only comes with the USB cable, and if you want a wall adapter, you have to purchase it separately.

The Kindle Fire is more of a tablet than a traditional e-reader. In fact, it bears a striking resemblance to the Blackberry Playbook. Like the Kindle Touch and Paperwhite models, the Fire has a touch-screen user interface. But it doesn't feature an E Ink display. Instead, it has an in-plane switching (IPS), liquid crystal display (LCD). It features a special browser developed by Amazon called Silk. Underneath all the flash of the device is a heavily modified version of the Android operating system. A new HD version of the Fire was introduced in 2012.

Now let's take a look at what makes the Kindle work.