Features of the Kindle Keyboard 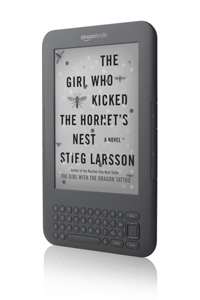 The Kindle Keyboard, released in 2011, looks a lot like the Kindle 2.
Courtesy Amazon

On either side of the Kindle Keyboard's screen you'll find two large buttons for "next page" and "previous page." The buttons have been completely redesigned since the first Kindle was released; some reviewers commented that the "back" and "previous page" buttons on the original Kindle sometimes function identically and at other times they do different things, which can cause confusion. Several critics pointed out that the placement of the buttons makes it easy for users to accidentally turn a page just by picking up the Kindle.

Beneath the screen on the original Kindle are a scroll wheel, a full keypad and an array of function buttons. The scroll wheel acts as a navigation interface -- like a mouse -- allowing the user to select options or specific lines of text. Pressing down on the wheel is like clicking a button on the mouse -- it lets you activate options. Newer Kindles replace the scroll wheel with a direction pad for navigation. The keypad allows you to use the search feature or type notes while reading text. Home, Back and Menu buttons help you navigate through books and use the built-in Web browser.

On the base of the Kindle you'll find a headphone jack (the Kindle can play MP3 files), a USB port and a power adapter plug. You'll also find a pair of volume buttons. The power button is on the back of the Kindle along with a switch that activates the Kindle's wireless receiver. Underneath the removable rubberized pad is a slot that can accept a standard SD flash memory card. You'll also find the Kindle's removable battery pack there. Amazon removed the option to add memory or replace the battery on the Kindle 2 and Kindle DX. For the third-generation Kindle readers, the power switch was moved to the base of the device, along with all the other ports [source: Perenson].

The Kindle Keyboard comes with a USB cable and a power adapter. The original Kindle also came with a protective book cover, which has a padded section that protects the screen and an elastic band that holds it closed. Amazon also has a selection of accessories for the Kindle, including leather covers and adapters for non-U.S. electrical systems.

Next, we'll take a closer look at the latest Kindles to hit the virtual shelves at Amazon.