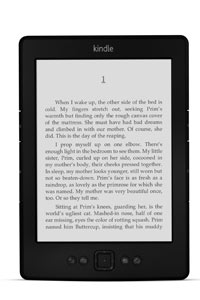 While the original Kindle only came in off-white, newer versions of the basic model have been released in graphite and onyx black.
Courtesy Amazon

The original Kindle has an off-white plastic casing and an asymmetric, beveled shape, like a closed three-ring binder. It has a rubberized back that makes it easier for users to hold the device. It's 7.5 inches (19 centimeters) long and 5.3 inches (13.5 centimeters) wide. It's only 0.7 inches (1.8 centimeters) thick and weighs a mere 10.3 ounces.

Amazon has changed the design of the Kindle a few times since its introduction. The third-generation device, also known as the Kindle Keyboard, is less angular than the original model. It initially came in two versions: a WiFi-only model and a 3G and WiFi model, the former of which is no longer available. The Kindle DX, a larger keyboard-laden e-reader with a 9.7-inch (24.6-centimeter) diagonal screen, has also been discontinued. The Keyboard 3G is just as tall as the first Kindle, but is less angular and a little narrower at 4.8 inches (12.2 centimeters) wide. It's 0.34 inches (8.5 millimeters) thick and weighs 8.7 ounces (247 grams).

In September 2011, Amazon unveiled three new Kindle models with E Ink electronic ink (we'll talk about this technology more later) displays like the originals, along with a tablet called the Kindle Fire. The first new Kindle model, which is now the base model for Amazon, uses a five-way controller and doesn't have a physical keyboard. It's the smallest Kindle yet, measuring in at 6.5 inches (17.3 centimeters) long and 4.5 inches (11.4 centimeters) wide and weighing 6 ounces (170.1 grams). Two Kindle Touch models -- one a WiFi only and the other a 3G and WiFi device, both with touch-screen interfaces and very few physical controls -- were also introduced, but have since been discontinued in favor of the new Kindle Paperwhite devices.

The Kindle Paperwhite and Paperwhite 3G were released in October 2012. The Paperwhite is similar to the Kindle Touch in appearance and size, measuring 6.7 inches (17 centimeters) long and 4.6 inches (11.7 centimeters) wide. Two differences on the new device are a lit screen and the omission of the physical home button. Aside from the power button, the only interface on the Paperwhite is the touch-screen.

The central feature on all the Kindle models, with the exception of the Kindle Fire tablet, is the electronic paper screen. The screens on all Kindle models except the Fire and the recently discontinued DX measure 6 inches (15.2 centimeters) along the diagonal. Kindle Keyboard 3G and the base Kindle have a resolution of 167 pixels per inch (PPI), whereas the new Paperwhite models have a resolution of 212 PPI [source: Amazon]. The screen can display images in 16 levels of gray using a technology called E Ink. Unlike LCD screens, the Kindle e-reader's screen isn't backlit. For all but the Paperwhite, you'll need a reading light if you want to skim a novel in a setting with little ambient light. And even the Paperwhite is not actually backlit like a tablet. Read on to find out more about the various Kindle features.