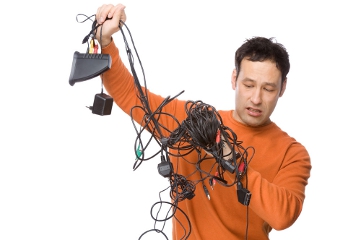 Tired of tangled cords? Could a wireless charger be the answer?
Hemera/Thinkstock

There are times when it may seem like we're living in the future. We have devices that we can hold in our hands and use to call up information stored in computers in enormous data centers all over the world. We can watch a film on one device, switch to another gadget and pick up right where we left off. We can automate our homes to perform tasks even if we're on the other side of the world.

But then there is always a wake-up call. Where are our jetpacks? Where are our flying cars? And what the heck are we supposed to do with all these darn cables?

That last question becomes increasingly relevant as we acquire more mobile devices. Smartphones, e-readers, tablets and portable music players are just the beginning. And each of these devices requires power to operate, which means sooner or later you'll have to charge them. That's when those cables really become an irritation.

You may have to deal with proprietary cables for multiple devices, meaning each cable will fit one -- and only one -- of your gadgets. If you aren't lucky in cable roulette, you have to keep grabbing cables until you find the right one. And if you have to recharge everything at once you've got a techno-octopus just waiting to tangle you up.

But there are ways to transmit power -- and charge devices -- without cables. There are several products on the market today that you can use to recharge a device just by setting the gadget down on a charging pad. Then, as if by magic, power transmits from the pad to the device. But it's not magic -- it's science!

From Tesla to Today

Nikola Tesla was quite a character. He was an eccentric genius whose work in the late 19th and early 20th centuries revolutionized electronic engineering. He was a pioneer in fields ranging from radio transmissions to developing alternating-current electricity. Tesla also had quite a few rivals -- his work tweaked the noses of some of the greatest inventors of the time, including Thomas Edison and Guglielmo Marconi.

Tesla filed many patents during his lifetime. One of those appeared in the patent office on Jan. 18, 1902. The patent's title was "Apparatus for Transmitting Electrical Energy." In the patent, Tesla describes a device that he believed could transmit electrical power from one conductor to another without the need for wires. Ultimately, Tesla's work in this field failed due to engineering and financial obstacles. But the dream didn't die with Nikola Tesla.

Transmitting power through radio waves at first seemed promising. A good example of how radio waves can transmit power is a crystal radio. This basic radio consists of a long wire as an antenna, a diode, another wire to act as the ground wire and a crystal earphone. By attaching the two wires to either end of the diode, connecting the ground wire to a metal stake in the ground and connecting the crystal earphone to the ends of the diode, this radio can pick up radio waves that you can actually hear, yet you don't need a battery or other power source to hear them -- the radio waves themselves provide the power.

The trouble with radio wave transmissions is they aren't very efficient. Radio waves spread out as they transmit -- only a relatively small percentage of them would make it to reach the antenna for the charging device. But there are other methods to send electricity wirelessly, including through microwaves or magnetism. The magnet approach really resonated with engineers looking for a way to get rid of those extra charging cords.

Tesla wasn't the only forward-thinking engineer to consider wireless power transmission. Daniel Watts Troy filed a patent in 1903 for a method of transmitting power without the use of wires.

To understand how wireless power chargers work, we need to take a look at how magnetism and electricity are related. It's a relationship that makes possible hundreds of different types of electronic devices!

First, let's take an electromagnet. It's easy to make a simple electromagnet -- all you need is a battery, some insulated copper wire and an iron nail. Wrap the wire around the iron nail, leaving enough wire on either end to connect to the battery. Make sure each time you wrap around the nail that you're going in the same direction. The more coils you make around the nail, the stronger your electromagnet will be.

Once you've got your nail wrapped in insulated wire, you can connect the two ends of the wire to the terminals on a battery. Electricity flows through the coiled wire, generating a magnetic field along the nail. You can use the nail to pick up other nails through magnetism. If you switch the ends of the wire to the opposite terminals on the battery, you'll reverse the polarity of your electromagnet -- what was the north end of the magnet becomes the south end and vice versa.

If you assemble a second coil of wire and place it near the first, you can use the magnetic field from your electromagnet to create a flow of electrons in the second coil. If you hook that second coil of wire to a voltmeter, you can actually see the needle or readout change whenever you connect or disconnect the wires from the battery.

A battery provides electricity in a direct current -- the electricity always flows in the same direction. But if you hook up an electromagnetic to an alternating current -- a circuit in which electricity flows first in one direction and then the other many times per second -- you alternate the polarity of the electromagnet in time with the changes in the current's direction. That creates a constantly changing magnetic field -- the perfect condition for inducting electricity. 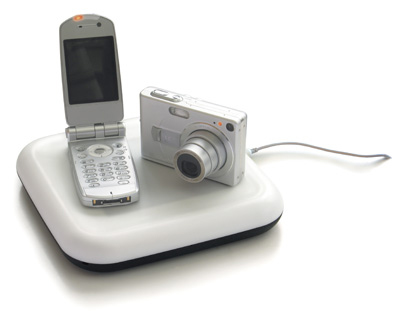 Some wireless charging stations allow you to charge multiple devices at the same time.
© Copyright Splashpower 2006

The charging station takes the form of a mat or other flat surface. Inside the mat are one or more inductive coupling coils. The mat itself is wired -- you have to plug it into a wall socket. Since the electricity coming to your house is alternating current, the mat provides the electricity the coils need to generate a changing magnetic field.

Your mobile devices need a special case or attachment to take advantage of this magnetic field. Some manufacturers make devices with cases and electronics that facilitate inductive coupling -- the Palm Pre had this feature. But most manufacturers make equipment that still requires cables or wires to recharge. For these devices, you may need to use special sleeves -- each sleeve fits a particular model of a device. Or you may have to attach an adapter that plugs into your mobile device's charging port. The sleeve or adapter will have the matching coil to the surface's inductor coils.

Whether your device natively supports inductive coupling or requires a sleeve or adapter, your next step is to place the device on the charging surface. The inductor coils inside the mat generate the magnetic field that induces electricity inside your device, sleeve or adapter. This electricity then recharges your device's battery. Because there's no direct current passing between the mat and the device, it's perfectly safe to pick up a gadget when you're on the go.

Inductive coupling is useful but there are some downsides. The largest drawback is that it doesn't work over large distances. Placing a device a little too far to one side might mean that you aren't actually recharging the battery. Some wireless charging surfaces try to compensate for this by outlining where a device should fit on the surface or by creating raised areas that devices fit inside to make sure the coils are close enough together to work.

While inductive coupling is the most common approach to wireless chargers, it's not the only game in town. Let's look at some alternatives to induction. 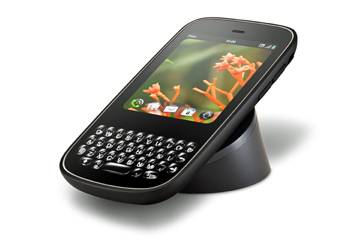 The Palm Pixi's design allowed you to charge the smartphone just by setting it on a charging station.
Courtesy Palm

Another approach to wirelessly recharging mobile devices uses a more direct route. Conductive recharging mats create a direct electric circuit between a mobile device and a charging surface. The charging device's surface has strips of conductive metal on it. When a device with corresponding electrical contacts touches these strips of metal, electricity flows into the device.

For this to work, the device must have the contacts incorporated into its case or a special sleeve that has the contacts on it. You snap your device into the appropriate sleeve -- each model and type of device needs its own -- and place the sleeved device on the right part of the surface, ensuring contact. This creates a circuit and charges your device.

You have to make sure the contacts on the sleeve match up with the conductive strips on the chargers surface or you won't create a circuit. But conductive strips can be more efficient than inductive coupling, which according to the Wireless Power Consortium averages between 50 and 70 percent efficiency [source: Higginbotham]. That means at least 30 percent of the power needed to run the charging station goes to waste, even in an efficient inductive coupling system.

While radio transmission of power isn't efficient, it's possible to design a charging station that converts radio frequency waves into direct current electricity. But unless you have a large antenna and a particularly powerful broadcast source, you won't harvest much electricity from the ambient signals around you.

In 2010, RCA announced the company was developing a wireless charging station that could harness WiFi signals and convert them into electricity. If such a device could work, it could be a great resource in any place that had a WiFi hotspot. But mathematically, such a device isn't practical. WiFi routers only emit only a tiny amount of energy -- often around one-tenth of a watt. A converter would only capture a fraction of that energy, which means charging something like a battery just once could take decades if you depend entirely on WiFi signals to supply the power.

Why only a tiny fraction? It's because energy emissions obey the inverse square law. This is a law that states any point source that spreads out evenly in all directions -- such as a radio wave -- will reduce in intensity relative to the distance from the source. When you start with a low-power energy emission and then move away from the source ,the intensity drops away quickly.

With so many options for wireless chargers, we may be close to saying farewell to tangled cables and proprietary plugs -- and good riddance!

I saw my first wireless charging station on a visit to CES. I thought it was a great idea. But there were several drawbacks. Many required you to put your electronics in a bulky sleeve that nearly doubled the weight of the device -- and you were supposed to just keep the sleeve on all the time. If you didn't place the gadget on the charging pad correctly, your device wouldn't charge. And you still had to plug the charging station into the wall. But even with the drawbacks, the promise of a cable-free phone was very attractive. I only wish phones like the Palm Pre had made a bigger impact so that we would see wireless charging become more of a standard across devices.