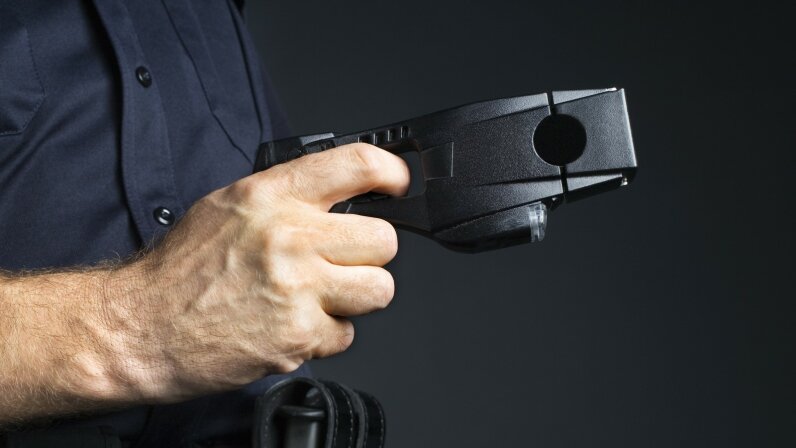 On th­e old "Star Trek" series, Captain Kirk and his crew never left the ship without their trusty phasers. One of the cooles­t things about these weapons was the "stun" setting. Unless things were completely out of control (as they frequently were), the Enterprise crew always stunned their adversaries, rendering them temporarily unconscious, rather than killing them.

We're still a ways off from this futuristic weaponry, but millions of police officers, soldiers and ordinary citizens do carry real-life stun weapons to protect against personal attacks. Like the fictional phasers of "Star Trek," these devices are designed to temporarily incapacitate a person without doing any long-term damage.

In this article, we'll find out how stun guns and Taser guns pull off this remarkable feat. While these weapons are by no means infallible, they can save lives in certain situations.

We tend to think of electricity as a harmful force to our bodies. If lightning strikes you or you stick your finger in an electrical outlet, the current can maim or even kill you. But in smaller doses, electricity is harmless. In fact, it is one of the most essential elements in your body. You need electricity to do just about anything.

When you want to make a sandwich, for example, your brain sends electricity down a nerve cell, toward the muscles in your arm. The electrical signal tells the nerve cell to release a neurotransmitter, a communication chemical, to the muscle cells. This tells the muscles to contract or expand in just the right way to put your sandwich together. When you pick up the sandwich, the sensitive nerve cells in your hand send an electrical message to the brain, telling you what the sandwich feels like. When you bite into it, your mouth sends signals to your brain to tell you how it tastes.

There are a wide range of stun weapons in use today. The three most popular devices, the standard handheld stun gun, the Taser gun and the liquid stun gun, all have advantages and disadvantages.

In this way, the different parts of your body use electricity to communicate with one another. This is actually a lot like a telephone system or the Internet. Specific patterns of electricity are transmitted over lines to deliver recognizable messages.

The basic idea of a stun gun is to disrupt this communication system. Stun guns generate a high-voltage, low-amperage electrical charge. In simple terms, this means that the charge has a lot of pressure behind it, but not that much intensity. When you press the stun gun against an attacker and hold the trigger, the charge passes into the attacker's body. Since it has a fairly high voltage, the charge will pass through heavy clothing and skin. But at around 3 milliamps, the charge is not intense enough to damage the attacker's body unless it is applied for extended periods of time.

It does dump a lot of confusing information into the attacker's nervous system, however. This causes a couple of things to happen:

At its most basic, this is all there is to incapacitating a person with a stun gun -- you apply electricity to a person's muscles and nerves. And since there are muscles and nerves all over the body, it doesn't particularly matter where you hit an attacker.

In the next section, we'll look at the main types of stun guns and see how they dump this charge into a person's body.

Down for the Count!

Stun-gun effectiveness varies depending on the particular gun model, the attacker's body size and his determination. It also depends on how long you keep the gun on the attacker.

If you use the gun for half a second, a painful jolt will startle the attacker. If you zap him for one or two seconds, he should experience muscle spasms and become dazed. And if you zap him for more than three seconds, he will become unbalanced and disoriented and may lose muscle control. Determined attackers with a certain physiology may keep coming despite any shock. 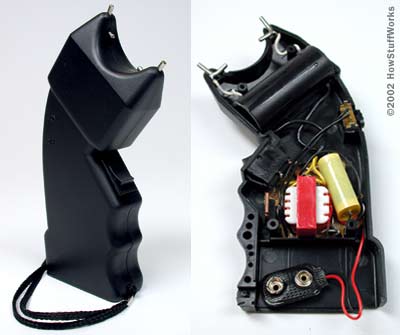 Conventional stun guns have a fairly simple design. They are about the size of a flashlight, and they work on ordinary 9-volt batteries.

The batteries supply electricity to a circuit consisting of various electrical components. The circuitry includes multiple transformers, components that boost the voltage in the circuit, typically to between 20,000 and 150,000 volts, and reduce the amperage. It also includes a oscillator, a component that fluctuates current to produce a specific pulse pattern of electricity. This current charges a capacitor. The capacitor builds up a charge, and releases it to the electrodes, the "business end" of the circuit.

These days, most stun-gun models have two pairs of electrodes: an inner pair and an outer pair. The outer pair, the charge electrodes, are spaced a good distance apart, so current will only flow if you insert an outside conductor. If the current can't flow across these electrodes, it flows to the inner pair, the test electrodes. These electrodes are close enough that the electric current can leap between them. The moving current ionizes the air particles in the gap, producing a visible spark and crackling noise. This display is mainly intended as a deterrent: An attacker sees and hears the electricity and knows you're armed. Some stun guns rely on the element of surprise, rather than warning. These models are disguised as umbrellas, flashlights or other everyday objects so you can catch an attacker off guard.

These sorts of stun guns are popular with ordinary citizens because they are small, easy-to-use, and legal in most areas. Police and military forces, on the other hand, typically use more complex stun-gun designs, with larger ranges. In the next couple of sections, we'll look at some of these sophisticated stun guns.

Cattle prods are similar to stun guns in design -- they apply an electrical current across two electrodes -- but they serve a completely different function. A stun gun uses an electrical charge to incapacitate someone, while a cattle prod applies a charge to get a person or animal moving. A cattle prod only causes pain, it does not significantly affect the muscles and nervous system of the body.

These two devices differ mainly in voltage. The voltage in a stun gun is high enough to dump electricity into the entire body. The lower voltage in a cattle prod only shocks someone at the point of contact.

One popular variation on the conventional stun-gun design is the Taser gun. Taser guns work the same basic way as ordinary stun guns, except the two charge electrodes aren't permanently joined to the housing. Instead, they are positioned at the ends of long conductive wires, attached to the gun's electrical circuit. Pulling the trigger breaks open a compressed gas cartridge inside the gun. The expanding gas builds pressure behind the electrodes, launching them through the air, the attached wires trailing behind. (This is the same basic firing mechanism as in a BB gun.)

The electrodes are affixed with small barbs so that they will grab onto an attacker's clothing. When the electrodes are attached, the current travels down the wires into the attacker, stunning him in the same way as a conventional stun gun.

­ The main advantage of this design is that you can stun attackers from a greater distance (typically 15 to 20 feet / 4 to 6 meters). The disadvantage is that you only get one shot -- you have to wind up and re-pack the electrode wires, as well as load a new gas cartridge, each time you fire. Most Taser models also have ordinary stun-gun electrodes, in case the Taser electrodes miss the target.

Some Taser guns have a built in shooter-identification system. When a police officer fires the Taser electrodes, the gun releases dozens of confetti-sized identification tags. These tags tell investigators which gun was fired, at what location. Some Taser guns also have a computer system that records the time and of every shot.

Tasers are only one way to conduct current over greater distances. In the next section, we'll look a relatively new long-range stun weapon that doesn't use any wires at all.

The companies that make stun guns specify that the weapons should be used conservatively, only for self-defense or incapacitating an unruly person. Unfortunately, stun guns are commonly used as torture devices in many parts of the world.

Amnesty International reports that a number of governments routinely use stun weapons to extract confessions from political prisoners. These officials know that electrical torture leaves less evidence than many other methods. The shock from a stun weapon is extremely painful, but it doesn't leave an obvious wound. So, while stun guns might be relatively safe weapons when used correctly, they can be quite dangerous in the wrong hands.

One of the newer stun weapons is the liquid stun gun. These devices work the same way as Taser guns except they use a liquid stream to conduct electricity rather than extended wires.

The gun is hooked up to a tank of highly conductive liquid, typically a mixture of water, salt and various other conductive elements. When you pull the trigger, electrical current travels from the gun, through the liquid stream, to the attacker.

­ These guns have a longer firing range than Taser guns, and you can shoot them many times in succession. They are generally more cumbersome than Taser guns, however, because you need to cart the conductive liquid around. High-powered guns work with vehicle-mounted water cannons, while portable models typically include a water tank backpack. Many portable units use the same sort of water pumping system as Super Soaker squirt guns.

Today, stun weaponry is a rapidly growing field of invention. Law enforcement and military forces need non-lethal weapons to subdue angry mobs without racking up civilian casualties. Many citizens who are concerned for their safety but aren't comfortable with firearms are seeking out reliable "safe weapons." As this technology advances, the prospect of Star Trek-type phasers doesn't seem so far-fetched. The teleporter, however, is another story...

For more information on stun weapons and related topics, check out the links on the next page.

In addition to incapacitating violent citizens out on the street, stun technology is also used to subdue criminals behind bars. There are prisons around the world that use stun-belt devices to keep their inmates in line, and to intimidate them.

Stun belts are basically stun guns that are already attached to potential offenders. Corrections officers carry a remote-control unit that operates the stun weapon. If an inmate becomes unruly, the officers activate the belt, which applies a high-voltage charge to the inmate's kidneys. While the inmate is stunned, officers may drag him back to his cell.