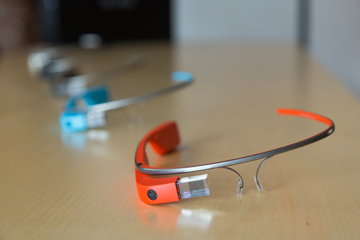 One of the big selling points of Google Glass is its unobtrusiveness -- but could that 'plus' actually be a huge security/privacy issue?
Brooks Kraft/Corbis

Not everyone has greeted the news of Google Glass with enthusiasm. Some, like Internet security expert David Asprey, have voiced concerns about the product and its implications

Part of Asprey's apprehension stems from the wording of Google's terms of service for Google Drive, a cloud-storage service. Included in those terms of service is this passage [source: Connelly]:

"When you upload or otherwise submit content to our Services, you give Google (and those we work with) a worldwide license to use, host, store, reproduce, modify, create derivative works (such as those resulting from translations, adaptations or other changes we make so that your content works better with our Services), communicate, publish, publicly perform, publicly display and distribute such content. The rights you grant in this license are for the limited purpose of operating, promoting, and improving our Services, and to develop new ones. This license continues even if you stop using our Services (for example, for a business listing you have added to Google Maps)."

At first glance, this makes it sound like any data you store in Google Drive effectively becomes Google's property. Google representatives say this is to allow Google to display your data in different ways [source: Google Terms of Service]. Let's say you've uploaded a file to Google Drive and you choose to make it publicly available. When people search for terms related to your file, that file should show up in search results. This part of the terms of service gives Google permission to display part of that file within the search results themselves.

Asprey's point is that the wording of terms like this one seems to give Google more control over user data than it should have. He also points out that with facial recognition software, the glasses could raise privacy issues.

Another concern is that Google could use the eyewear as a platform for collecting personal data and serving ads. As you go about your day wearing these glasses, Google could create a virtual profile. Based on your behaviors and location, Google could potentially serve up what it considers to be relevant advertisements to the screen on your glasses.

And then there are concerns that receiving social networking updates in your field of vision could impair your ability to do other tasks, such as driving. Google's response to this reaction was to point out that the screen in Google Glass eyewear is positioned at the top of the frame, requiring you to look up with your eyes to see it. You shouldn't have to worry about text messages or pop-up ads obscuring your view as you wear the glasses.

Even with the Explorer program in full gear, it's too early to say whether these concerns are warranted. It may be that the glasses never make it to consumer shelves. But privacy advocates warn that we should think about the possible consequences now, before they become real problems later.

Google representatives have already addressed some concerns and say they welcome feedback. It's likely that the consumer version of the glasses -- assuming the project gets that far -- will be different from the prototype versions. Perhaps by then, Google will have found a way to let people dive into a data-rich environment while still protecting their privacy.