Cameras, Speakers and Sensors, Oh My! 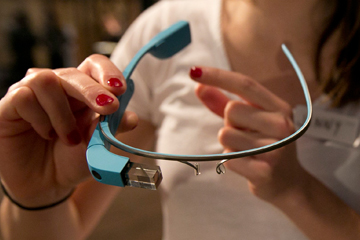 The prism in Google Glass redirects images to your eye. The technology was being shown off here at a public event in Austin, texas in 2013.
Bob Daemmrich/Corbis

While the guts of Google Glass are interesting, the most eye-catching component is the prism-like screen. When turned off, it appears to be a clear prism. Viewed from the top, you can just make out a diagonal line that bisects the prism's width. This diagonal line is where the prism has an angled layer that acts as a reflective surface.

Images from Google Glass project onto the reflective surface in the prism, which redirects the light toward your eye. The images are semi-transparent -- you can see through them to the real world on the other side. As of early 2014, the resolution for the display is 640 by 360. It's not exactly high definition, but at such a close distance to your eye it doesn't appear to be low resolution.

If you look just to the side of the display toward the outer edge of the glasses, you'll see a camera lens. According to Google, the camera can take photos with a resolution of 5 megapixels. It can also capture video at 720p resolution.

The speaker on Google Glass is a bone conduction speaker. That means the speaker sends vibrations that travel through your skull to your inner ear -- there's no need to plug in ear buds or wear headphones. Using the camera and speaker together allows you to make video conferencing calls. Just know that the person on the other end of the line will be seeing what you're seeing since there's only a forward-facing camera on the glasses.

Also on board the glasses are a proximity sensor and an ambient light sensor. These sensors help the glasses figure out if they are being worn or removed. You can choose to have your Google Glass go into sleep mode automatically if you take them off and wake up again when you put them on. These sensors can also detect if you take an action such as winking, which opens up the option to send commands such as "take a picture" just by giving a big wink. (Yep, there's absolutely nothing creepy about that.)

One last sensor inside Google Glass is the InvenSense MPU-9150. This chip is an inertial sensor, which means it detects motion. This comes in handy in several applications, including one that allows you to wake up Google Glass from sleep mode just by tilting your head back to a predetermined angle.

All of these chips and features need power to work. That power is provided by a battery housed in a wide section of the stem. It fits behind your right ear. It's a lithium polymer battery with a capacity of 2.1 watt-hours. Google says that charging the battery takes just 45 minutes when using the charging cable and plug that come with the glasses [source: Torborg and Simpson].