by Marshall Brain
Prev NEXT
8 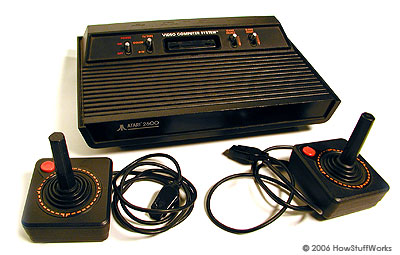 There were video game consoles prior to the 1980s, but they weren't that popular. Video games were in arcades (and running on computers like the Apple II) in the late 1970s, and even simple video game consoles with games like "Pong" were available. Atari released the Atari 2600 in 1977, but sales were slow. In 1979, the 2600 started to gain momentum, and then in 1980 it exploded because of the game "Space Invaders" and falling prices. By 1982, Atari was selling 8 million units a year and video games were everywhere. "Pac-Man," released in 1980, was exploding at the same time.­

These early consoles were incredibly primitive by today's standards. The Atari 2600 used a 6507, a primitive 8-bit processor running at 1.19 MHz. The graphics resolution was about 160 x 190 pixels and 128 colors, but you could only have four colors per line. The console had 128 bytes of RAM. A game cartridge contained a 4,048-byte ROM (although later cartridges could have 32 kbytes divided into eight 4K pages).

What this meant is that the games on the Atari 2600 were very simple. Just a few moving objects, 2-D sprite-type animation, a handful of colors on a mostly black screen. There simply was not enough processing power or memory available to do much else.