by Marshall Brain
Prev NEXT
6 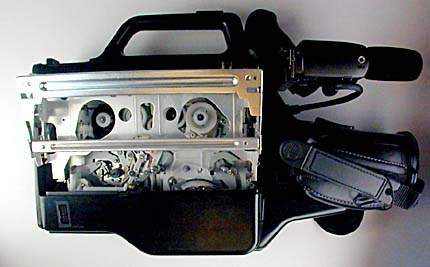 A camcorder with the VCR unit exposed

If you miniaturize a VCR just a bit, and then add a video camera and a big battery to it, and put it all in a case that you can sling on your shoulder, what you get is a camcorder. And if you were a middle class parent in the 1980s, you HAD to have one.

To understand why camcorders took the world by storm in the 1980s, you have to understand what they replaced. At the time, you used an 8mm movie camera to make "home movies." You had to buy a 25 foot long roll of 16mm film, put it in the camera (preferably in the dark), thread it and shoot two minutes of film. Then you opened the camera up again, turned the roll of film over in the camera, rethreaded it, and shot another two minutes. Then you sent it in to be developed. The lab would slit the film along its length and then tape the two pieces of film together to create a 50-foot reel, four minutes long.

The problems with this format were immense. An 8mm image is tiny, so the picture was grainy. Having to shoot in two-minute increments was a pain. If you dropped the roll, it was ruined from being exposed to light. The film was pretty expensive and so was the processing. To watch the film you had to get out a big, clunky and temperamental projector, plus a screen. And to cap it all off, these movies were silent.

Enter the camcorder. You stick in a standard VHS tape that you had laying around anyway (or purchased for $5). You could shoot two hours of video. It had sound and decent resolution. And when you got home you simply popped the tape into your normal VCR to play it. No waiting and no processing. It was a miracle!

The 8mm camera disappeared in no time, and everyone had a camcorder.

To learn more about camcorders, see How Camcorders Work.