by Marshall Brain
Prev NEXT
3 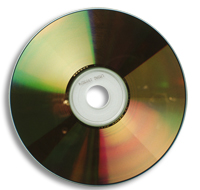 Before compact discs, you had to rewind and fast-forward to get to a particular bit of information.

Like the GUI, it is hard for us to imagine life before compact discs, or CDs. It is also hard to imagine just how revolutionary the CD was at the time. But you can get a sense of it by thinking back to the way that people got their music during the 1970s.

The two major formats for holding music in the 70s were the Vinyl LP and the cassette tape. You could also get music from an AM or FM radio station. The 8-track tape was still common in 1980, but it was on the way out because the "compact cassette" was so much better, and you could record your own cassettes to boot.

One thing that all of these formats had in common was hiss. Whether you were playing an LP or listening to a tape, you would hear the hiss. It was just something that everyone expected.

So when the CD came out around 1983, the thing you immediately noticed was the total lack of hiss when you played the CD. I had an audiophile friend at the time, and I remember going to his house to hear one of the first CDs. He had paid well over $1,000 for the player. He put in a CD, cranked the volume, hit the play button and you heard nothing. Then the music absolutely exploded out of nowhere, and it was unbelievably clear. The whole experience was breathtaking.

The other thing about CDs was the absence of wear. Cassettes stretched and broke. The oxide flaked off. The capstan that pulled the tape past the head would suffer from "wow and flutter." Albums had problems with dust, scratches, warping (from heat) and "wow and flutter" as well.

At the time, the best turntables had massive platters (to reduce "wow and flutter") and tone arms counterbalanced like a precision chemistry scale (to try to reduce wear). You would use little anti-static guns and sprays to try to reduce dust. You would record the album to tape and listen to the tape so that you didn't have to take the album out of its sleeve. It was nuts.

The CD came along and did away with all of that. All of the problems with dust, scratches, stretch, heat, motors, etc. completely disappeared. What you had was pure, clean digital sound. And the CD held over an hour of music. And CDs were rugged -- you could stick them in the dishwasher if you wanted to. This whole collection of goodness seemed like a miracle at the time.

The funny thing is that the core technology of a CD is so simple. The CD is nothing but a mirror. On that mirror are billions of tiny scratches. The CD player shoots a laser at this mirror, and the laser either hits one of the scratches or it doesn't. A sensor can sense whether the laser hits clean or scratched mirror by the strength of the reflection. That different lets the scratches represent a binary zero and the mirror represent a binary one. With a one and a zero, you are set to encode digital information. See How CDs Work for more information.