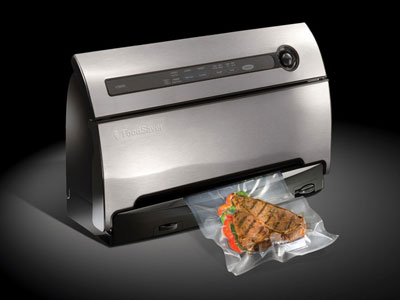 ­It's among the more annoying experiences a human being can endure: You pull a potato chip from a bag you dutifully rolled up and closed as best as you could last night -- and find your chip has grown stale.

The nightmares get worse when you reach into the freezer and retrieve that fine Porterhouse steak you froze a few weeks ago, only to find it's browned and covered with what looks like liver spots and encrusted with ice crystals. You might call it freezer burn. What's going on here? There's actually a perfectly reasonable physical explanation for what happens when food goes stale or becomes freezer burned. It has to do with air.

Food may have an abundance or a lack of moisture. If it's moisture-laden, a chemical exchange with the ambient air occurs. Moisture escapes from a steak, for example, and dries it out. In the freezer, ice crystals form as moisture accumulates outside of the steak. Oxygen molecules in the ambient air fill the void left behind by the escaping water molecules. This is what browns the meat [source: LOC].

­On the flip side, when chips -- which lack moisture -- are stored, the air exchange infuses them with water molecules, which makes them stale and soft. Food isn't the only foodstuff to suffer at the hands of an air exchange. Wine goes bad and soda loses its carbonation. Either way, it's a bad situation.

Fortunately, alternatives to freezer burn and stale chips abound. For one, there's the FoodSaver System -- a home vacuum sealer that removes the air surrounding the food we wish to store and helps to preserve it. Read the next page to learn about the mechanics behind this invention. 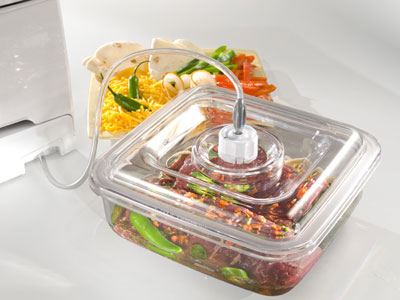 As we've seen, there are two ways to use the FoodSaver System, with bags and with containers with specially-designed lids. We'll take a look at both of these vacuum sealing methods.

It's a easy to vacuum-seal food using bags. A roll of plastic bags -- one long plastic bag, actually -- is stored inside the FoodSaver unit. To create a customized bag, a length of plastic can be pulled out and cut with the bag slicer blade. If it's the first bag off a new roll, the end will be sealed already. If the roll has already been used, the bottom end of the bag will have also already been sealed, since the last sealing will have fused the end on the top of the last bag as well as the bottom of the next one.

Once a foodstuff is put into the bag, the open end can be placed into the vacuum channel, a horizontal slot located at the unit's base. Here, the FoodSaver senses the bag and begins to do its thing. It will shut itself off, but the company recommends using the "Seal" button when vacuum sealing fragile or soft foods like potato chips or angel food cake [source: FoodSaver]. This will cause the machine to seal the bag immediately, rather than continuing to remove air and possibly crushing the chips or smashing the cake. To keep liquids from rising out of the bag and into the drip tray (which will cut the power to the vacuum device), you can freeze the liquid item before placing it in a bag and sealing it in solid form.

The machine also comes with a retractable hose for vacuuming air from things like wine bottles and Mason jars as well as for marinating meats and infusing oils. The hose plugs into the tops of the lids the company sells (some units come with accessory lids, but the hose is only compatible with FoodSaver accessories). As when sealing bags, the FoodSaver hose canister attachment shuts off automatically once the pressure with in the jar or bottle has dropped. Untwisting the hose from the lid seals the lid.

Food isn't the only item that the FoodSaver can keep intact. The company also suggests a number of uses for the vacuum sealer. Live in a flood zone? You can keep paper documents dry indefinitely by sealing them. The same goes for emergency kits for water-logged outings like kayaking trips. It's also a good way to save seeds for gardening between seasons.

Visit the next page for more information on the FoodSaver and related topics.