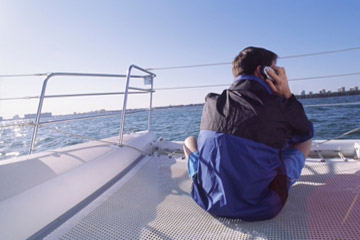 The greatest advantage of mobile technology is that you can access your e-mail, your data and the Web anytime, anyplace -- including, apparently, the bathroom. According to a Google-sponsored study, 39 percent of smartphone owners use their mobile devices in the loo [source: Golijan]. Not only is it hygienically questionable, but downright dangerous to your beloved device. A survey from address book site Plaxo found that 19 percent of respondents had lost their mobile contacts because they dropped their phone in the toilet [source: Chansanchai].

The standard insurance plans that come with $200 smartphones and $500 tablets don't cover water damage, because the behavior associated with such accidents — texting on an inflatable pool chair, for example — is considered "negligent" [source: Noguchi]. Perhaps that's why gadget geeks at the 2012 Consumer Electronics Show were so excited about new waterproofing technologies coming soon for mobile devices.

Companies like HzO, Liquipel and P2i have developed waterproof nano-coatings that protect mobile devices inside and out. To waterproof the device, it is placed in a vacuum chamber and exposed to a gas containing the waterproofing polymer. Each company uses a different proprietary polymer, which bonds to the device surface and internal components on a molecular level [source: Applegate]. The nano-coating is a thousand times thinner than a human hair, so it doesn't affect the look and feel of the devices nor the functionality of sensitive electronic components.

Demonstrations at CES 2012 and on YouTube show smartphones playing music and receiving texts while fully submerged in fish tanks. The nano-coating companies are working with manufacturers like Apple and Samsung to build waterproofing directly into the manufacturing process by summer 2013 [source: Applegate]. Meanwhile, you can send your mobile device to Liquipel and have it waterproofed for $60 for a cell phone or $90 for a tablet.

Consumers are expected to spend $222 billion worldwide on mobile devices in 2012 and that figure will grow to $300 billion by 2016 [source: Gartner]. As we invest more and more in our mobile digital lives, device makers expect waterproofing to become a must-have technology for the future. The good news is that nano-coating on an industrial scale is not expected to significantly raise the price of your favorite mobile gadget [source: Applegate].

For lots more information on the future of consumer electronics, explore the related links on the next page.

Everyone has a story like mine. I took the kids to a friend's house to swim in their pool. I slipped my cell phone into my swimsuit pocket in case my wife or work needed to reach me. And that's exactly where it was — in my pocket — when I cannonballed into the pool. I tried the "bag of rice" method for reviving the drowned phone, but ended up with a dead gadget that resembled a robotic California roll. Like millions of fellow morons who have dropped their phone in the pool, a puddle or — yes — the toilet, I would gladly pay an extra few bucks for a waterproof phone. Now when are they coming out with the idiot-proof model?