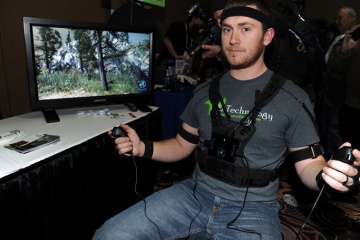 For most people, fun is the hook that makes new technology worth investigating. Wearable technology promises entertainment galore.

Video games are bigger than ever, with cinematic appeal and wow-inducing special effects. Still, the games would be more immersive with more life-like control systems. That's what the PrioVR plans to deliver.

Depending on the model, you'll attach between eight and 17 inertial sensors to your body. As you play a game, the sensors correlate your real-life movements to your on-screen character. The wearable nature of PrioVR -- a gaming suit that players don for motion-capture action gaming -- advertises more accurate movement than data captured from remote cameras like the Kinect or handheld devices like the Wii remote, which the company hopes will mean more fun.

Wearable cameras are nothing new; mountain bikers, parachutists and other adventuresome souls have been using them for years. But the Ego LS, from Liquid Image, is a wearable camera that streams your footage at 30 frames per second directly to the Internet via a 4G or WiFi signal. (There are more serious uses for an instant-streaming capability. Firefighters, law enforcement and military types can now use any decent cell signal to send live video anywhere in the world.)

Desperate to improve your baseball, golf or tennis swing? Attach a small, square Zepp sensor to your glove or equipment and you'll have immediate feedback on speed, acceleration, line of sight and power. The small sensors recharge via a USB port and they work directly with both iOS and Android smartphone apps via Bluetooth. For example, if you're practicing your golf swing, the Zepp app will provide instant statistical data on club plane, hand plane, backswing distance, tempo and hip rotation. You can also watch an animated playback of your swing so you can see areas that need improvement.

Most wearables aren't quite ready for prime time, though. Next, read all about some of the inherent obstacles to technologies like these.