How to Use Echo 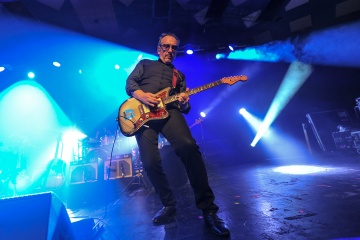 Tell Alexa you'd like to hear some Elvis Costello, and your Echo will comply.
Roberto Ricciuti/Redferns/Getty Images

The Echo constantly listens for a special wake word to know when to start listening for commands and do your bidding, provided you haven't turned off the device's microphone. The default wake word is "Alexa," but you can change it to "Amazon" or "Echo" using the app. There are plans to add more possible wake commands in the future [source: Davies]. When the Echo's light ring is blue (with a cyan portion toward the person speaking), it is sending audio to the cloud and processing your request.

Echo will understand a certain set of pre-programmed commands, and when you speak the wake word before a command, it does one of three things: performs the task you requested, prompts you for more information or tells you it doesn't understand your request.

You can also press the action button at the top of your Echo or press the talk button in your Alexa app or remote to start issuing commands. You can speak into the remote from other rooms and get Echo to respond. The action button can also be used directly to turn off alarms and timers if you don't want to do it via voice. If you want, you can use the app or website to set the device to play, start and end sounds when it wakes up and when it stops sending your audio.

Examples of Echo voice commands include:

You can obviously ask your Echo quite a few things, and it even has some built-in Easter eggs. For instance, if you say the Princess Bride line, "Alexa, inconceivable!," it will reportedly reply, "You keep using that word. I do not think that word means what you think it means" [source: Pogue].

And as with our actual language, there are multiple ways to say some of the same things. For instance, the following should make Echo play the same audiobook:

You can consult the Amazon Echo help pages and the Alexa app for more information on working commands.