5 Tips for Choosing the Right Tablet

by Beth Brindle
Prev NEXT
4 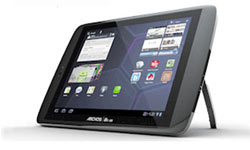 Archos' newest and fastest G9 tablets are slated for a fall 2011 release and will feature the Android Honeycomb 3.2 operating system and 16 to 250 GB of memory.
Image courtesy of Archos

Generally speaking, if you need to get a lot of work done on your tablet, especially creating or manipulating documents and spreadsheets, a Windows tablet might be the way to go. While you can easily read Word documents on an iPad, you need a paid app such as Quickoffice to edit them, and the process can still be somewhat clunky [source: Wilson]. Tablets running Android 3.0 (also called Honeycomb) can handle Office files with the help of a paid app like Documents To Go 3.0, which allows users to create, view, and edit Word docs, Excel spreadsheets and PowerPoint presentations [sources: Brent; Dolcourt].

The iPad is still the favorite for gaming and media playback, although Android tablets such as the Samsung Galaxy and Motorola Xoom now meet or exceed the iPad's screen resolution and processing speed [sources: Bell; Tablet PC Comparison]. Of course, the one area where Apple is the indisputable leader is its app store, which offers more than 140,000 apps for the iPad as of November 2011. If you know that there are certain apps or programs that you want -- or that you'll need for work or school -- be sure to find out whether they're available for the tablet you're considering.